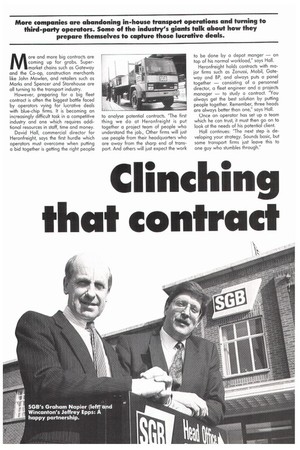 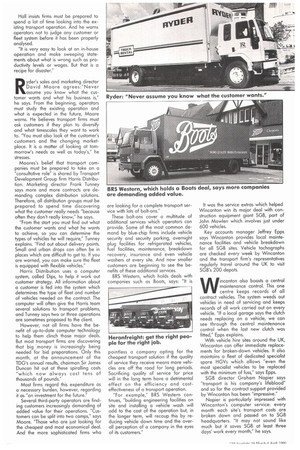 Page 58, 29th March 1990 — Clinching that contract
Close
Noticed an error?
If you've noticed an error in this article please click here to report it so we can fix it.
Keywords : Emergency Road Service, Vehicle Recovery, Bus, Business / Finance

More and more big contracts are coming up for grabs. Supermarket chains such as Gateway and the Co-op, construction merchants like John Mowlen, and retailers such as Marks and Spencer and Storehouse are all turning to the transport industry.

However, preparing for a big fleet contract is often the biggest battle faced by operators vying for lucrative deals with blue-chip firms. It is becoming an increasingly difficult task in a competitive industry and one which requires additional resources in staff, time and money.

David Hall, commercial director for Heronfreight, says the first hurdle which operators must overcome when putting a bid together is getting the right people to analyse potential contracts. "The first thing we do at Heronfreight is put together a project team of people who understand the job., Other firms will just use people from their headquarters who are away from the sharp end of transport. And others will just expect the work to be done by a depot manger — on top of his normal workload," says Hall.

Heronfreight holds contracts with major firms such as Zanussi, Mobil, Gateway and BP, and always puts a panel together — consisting of a personnel director, a fleet engineer and a projects manager — to study a contract. "You always get the best solution by putting people together. Remember, three heads are always better than one," says Hall.

Once an operator has set up a team which he can trust, it must then go on to look at the needs of his potential client.

Hall continues: "The next step is developing your strategy. Sounds basic, but some transport firms just leave this to one guy who stumbles through." Hall insists firms must be prepared to spend a lot of time looking into the existing transport operation. And he warns operators not to judge any customer or fleet system before it has been properly analysed.

"It is very easy to look at an in-house operation and make sweeping statements about what is wrong such as productivity levels or wages. But that is a recipe for disaster,"

Ryder's sales and marketing director David Moore agrees:"Never assume you know what the customer wants and what his business is," he says. From the beginning, operators must study the existing operation and what is expected in the future, Moore warns. He believes transport firms must ask customers if they plan to diversify and what timescales they want to work to. "You must also look at the customer's customers and the changing marketplace. It is a matter of looking at tornmorrow's needs as well as today's," he stresses.

Moores's belief that transport companies must be prepared to take on a "consultative role" is shared by Transport Development Group firm Harris Distribution. Marketing director Frank Tunney says more and more contracts are demanding complex distribution solutions. Therefore, all distribution groups must be prepared to spend time discovering what the customer really needs "because often they don't really know," he says.

"From the start you must find out what the customer wants and what he wants to achieve, so you can determine the types of vehicles he will require," Tunney explains. "Find out about delivery points. Small and urban drops can often be in places which are difficult to get to. If you are warned, you can make sure the fleet is equipped with flexible vehicles."

Harris Distribution uses a computer system, called Dips, to help it work out customer strategy. All information about a customer is fed into the system which determines the type of fleet and number of vehicles needed on the contract. The computer will often give the Harris team several solutions to transport problems, and Tunney says two or three operations are sometimes proposed to the client.

However, not all firms have the benefit of up-to-date computer technology to help them clinch those major deals. But most transport firms are discovering that big money is increasingly being needed for bid preparations. Only this month, at the announcement of the TDG's annual results, chairman Sir James Duncan hit out at these spiralling costs "which now always cost tens of thousands of pounds."

Most firms regard this expenditure as a necessary burden, however, regarding it as "an investment for the future."

Several third-parry operators are finding customers increasingly demanding of added value for their operations. "Customers can be split into two camps," says Moore. "Those who are just looking for the cheapest and most economical deal. And the more sophisticated firms who are looking for a complete transport service with lots of bolt-ons."

These bolt-ons cover a multitude of additional services which operators can provide. Some of the most common demand by blue-chip firms include vehicle security and security parking, overnight plug facilities for refrigerated vehicles, fuel facilities, maintenance, breakdown recovery, insurance and even vehicle washers at every site. And now smaller customers are beginning to see the benefits of these additional services.

BRS Western, which holds deals with companies such as Boots, says: "It is pointless a company opting for the cheapest transport solution if the quality of service they receive means more vehicles are off the road for long periods. Sacrificing quality of service for price will in the long term have a detrimental effect on the efficiency and costeffectiveness of a transport operation.

"For example," BRS Western continues, "building engineering facilities on site and installing a vehicle wash will add to the cost of the operation but, in the longer term, will recoup this by reducing vehicle down time and the overall perception of a company in the eyes of its customers." It was the service extras which helped Wincanton win its major deal with construction equipment giant SGB, part of John Mowlen which involves just under 600 vehicles.

Wincanton also boasts a central maintenance control. This one centre keeps records of all contract vehicles. The system weeds out vehicles in need of servicing and keeps records of all work carried out on every vehicle. "If a local garage says the clutch needs replacing on a vehicle, we can see through the central maintenance control when the last new clutch was fitted," Epps explains.

With vehicle hire sites around the UK, Wincanton can offer immediate replacements for broken-down vehicles. It also maintains a fleet of dedicated specialist spare HGVs which allows "even the most specialist vehicles to be replaced with the minimum of fuss," says Epps.

SGB director Graham Napier says "transport is his company's lifeblood" and so far the contract support provided by Wincanton has been "impressive." Napier is particularly impressed with Wincanton's computer service: every month each site's transport costs are broken down and passed on to SGB headquarters. "It may not sound like much but it saves SGB at least three days' work every month," he says.