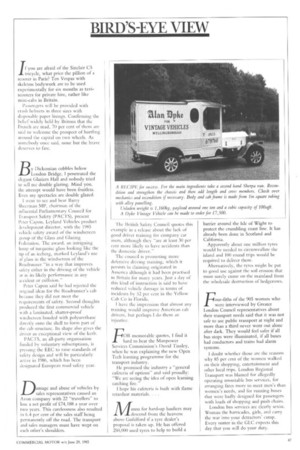 f you arc afraid of the Sinclair CS

tricycle, what price the pillion of a scooter in Paris? Ten Vespas with skeleton bodywork are to be used experimentally for six months as taxiscooters for private hire, rather like mini-cabs in Britain.

Passengers will be provided with crash helmets in three sizes with disposable paper linings. Confirming the belief widely held by Britons that the French are mad, 70 per cent of them are said to welcome the prospect of hurtling around the capital on two wheels. As somebody once said, none but the brave deserves to fare.

By Dickensian cobbles below London Bridge, I penetrated the elegant Glaziers Hall and nobody tried to sell me double glazing. Mind you, the attempt would have been fruitless. Even my spectacles are double glazed.

I went to see and hear Barry Sheerman MP, chairman of the influential Parliamentary Council for Transport Safety (PACES), present Peter Capon, Leyland Vehicles product development director, with the 1985 vehicle safety award of the windscreen group of the Glass and Glazing Federation. The award, an intriguing Lump of turquoise glass looking like the tip of an iceberg, marked Leyland's use of glass in the windscreen of the Roadrunner "in a way that improves safety either in the driving of the vehicle or in its likely performance in any accident or collision."

Peter Capon said he had rejected the original ideas for the Roadrunner's cab because they did not meet the requirements of safety. Second thoughts produced the first commercial vehicle with a laminated, shatter-proof windscreen bonded with polyurethane directly onto the shell to form part of the cab structure. Its shape also gives the driver an exceptional view of the kerb.

PACTS, an all-party organisation funded by voluntary subscriptions, is pressing the EEC to raise standards of safety design and will he particularly active in 1986, which has been designated European road safety year.

Damage and abuse of vehicles by sales representatives caused an Avon company with 22 "travellers" to lose a net profit of £74,188 a year over two years. This carelessness also resulted in 6.4 per cent of the sales staff being permanently off the road. The transport and sales managers must have wept on each other's shoulders.

The British Safety Council quotes this example in a release about the lack of good driver training for company car users, although they "arc at least 30 per cent more likely to have accidents than the domestic driver."

The council is promoting more defensive driving training, which it persists in claiming originated in America although it had been practised in Britain for many years. Just a day of this kind of instruction is said to have reduced vehicle damage in terms of incidents by 52 per cent in the Yellow Cab Co in Florida.

I have the impression that almost any training would improve American cab drivers, but perhaps I do them an injustice.

FOR memorable quotes, I find it hard to beat the Manpower Services Commission's David Tinsley, when he was explaining the new Open Tech learning programme for the transport industry.

He promised the industry a "general cafeteria of options" and said proudly: "We are seeing the idea of open learning catching fire."

I hope his cafeteria is built with flame retardant materials. . . .

Manna for hard-up hauliers may descend from the heavens above Guildford if a tyre dealer's proposal is taken up. He has offered 250,000 used tyres to help to build a

barrier around the Isle of Wight to protect the crumbling coast line. It has already been done in Scotland and California.

Apparently about one million tyres would he needed to circumvallate the island and 100 round trips would be required to deliver them.

Alternatively, the tyres might be put to good use against the soil erosion that must surely ensue on the mainland from the wholesale destruction of hedgerows.

pour-fiths of the 905 women who were interviewed by Greater London Council representatives about their transport needs said that it was not safe to use public transport at night and more than a third never went out alone after dark. They would feel safer if all bus stops were illuminated, if all buses had conductors and trains had alarm systems.

I doubt whether those are the reasons why 85 per cent of the women walked on their shopping, entertainment and other local trips. London Regional Transport was blamed for allegedly operating unsuitable bus services, for arranging fares more to meet men's than women's needs, and for running buses that were badly designed for passengers with loads of shopping and push chairs.

London bus services are clearly sexist. Woman the barricades, girls, and carry the war into your detractors' camp. Every nutter in the GLC expects this day that you will do your duty.