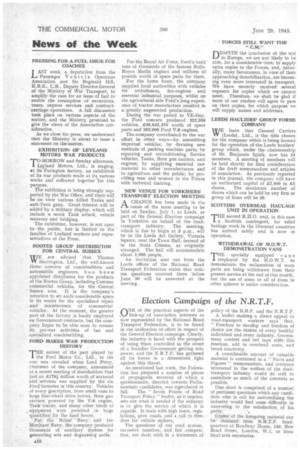 PRESSING FOR A FUEL ISSUE FOR COACHES

LAST week, a deputation from the Passenger Vehicle Operators Association met Sir Reginald Hill, CB., Deputy. Director-General of the Ministry of War Transport, to amplify the case for an issue of fuel to enable the resumption of excursions, tours, express services and contractcarriage operations. A full discussion took place on various • aspects of the matter, and the Ministry promised to give the views of the Association consideration.

As we close for press, we understand that the Ministry is about to issue a statement on them-atter.

EXHIBITION OF LEYLAND. MOTORS WAR PRODUCTS 'TO-MORROW and Sunday afternoon, 1 Leyland Motors, Ltd., is staging, at its Farington factory, an exhibition of its war products made at its various works and collected together for this purpose.

The exhibition is being strongly supported by the War Office, and there will be on view various Allied Tanks and anti-Tank guns. Great interest will be added by a military display, which will include mock Tank attack, vehicle recovery and bridging.

The exhibition, however, is not open to the public, butis limited to the families of• Leyland workers and representatives of the Press.

WE are advised that Thomas Harrington, Ltd., the well-known Hove concern of coachbuilders and automobile engineers, has been appointed distributor for the products of the Rootes Group, including Commer commercial vehicles, for the Central Sussex area. It is the company's intention to set aside considerable space in its works for the specialized repair and maintenance of commercial vehicles. At the moment, the greater part of the factory is busily employed on Government contracts, but the company hopes to be able soon to resume its pre-war activities of bus and specialized coachbuilding, FORD MAKES WARPRODUCTION HISTORY rrHE extent of the part played by 1 the Ford Motor Co., Ltd., in the war was revealed when Lord Perry, chairman of the company, announced at a recent meeting of shareholders that just on £179i million worth of material ,and services was suppliedr by the six Ford factories in this country. Vehicles of every 4escription, from small vans to large fdur-Wheel drive lorries, Bren gun . carriers powered by the V-8 engine, Tank tracks, and many other kinds of , equipment were provided in huge quantities, for the land force's. Fr Ile Royal. 'Navy and the Merchant Naiiy, the company produced thousands of 'auxiliary motors for generating sets and degaussing units.

For the Royal Air Force, Ford's built tens of thousands of the famous RollsRoyce Merlin engines and millions of pounds worth of spare parts for them.

For the home front, the company supplied local authorities with vehicles for ambulances, fire-engines and essential industrial purposes, whilst on the agricultural side Ford's long experience of tractor .manufacture resulted in a greatly augmented production.

The.company contributed to the war effort in other ways—by assembling imported vehicles; by devising new methods, of packing machine parts; by repairing and reconditioning Service vehicles, Tanks, Bren gun carriers, and engines; by supplying essential raw material to other manufacturers and to agriculture, and the public; by providing men and women in the Forces with technical training.

ACHANGE has been made in the , venue of the mass meeting to be held on Sunday, July 1, at Leeds, as -part of the General Election campaign in Yorkshire on behalf of the roadtransport industry. The meeting, which is due 'to begin at 3 p.m., will be in the Leeds Art Gallery, Victoria Square, near the Town Hall, instead of in the Scala Cinema, as originally arranged. The hall will accommodate about 1,000 people.

An invitation sent out from the Leeds offices of the National Road Transport Federation states that written questions received there before June 30 will be answered at the meeting.

DESPITE the conclusion of thewar in Europe, we are not likely to be able, for a considerable time; to supply extra copies to the Forces, and, naturally, many Servicemen, in view of their approaching demobilization, are becoming even more interested in transport. We have recently receivedseveral requests' for copies which we cannot meet: Therefore, we shall be glad if more of our readers will agree to pass on. their. copies, for which purpose we will supply names and addresses.

LEEDS HAULIERS' GROUP FORMS COMPANY ly/E learn that General Carriers VV (Leeds), Ltd., is the title chosen for the company which is being formed for the operation of the Leeds hauliers' group which, under thechairmanship of Mr. Benjamin Spink, now has 24 members. A meeting of members will be held shortly for final consideration of the draft memorandum and articles of association. As previously reported in this journal, the company will have an authorized capital of £2,000 in £5 shares. The maximum number of shares which can be held by any firm or group of firms will be 20.

'THE second R.H.O. unit, in this case 1 a Scottish contingent, for relief haulage work in the liberated countries has arrived safely and is now in operation.

THE specially equipped vans employed by the M.O.W.T. to demonstrate the reclamation, of worn parts are being withdrawn from their present service at the end of this month, but the use of some or all of them in other spheres is under consideration.