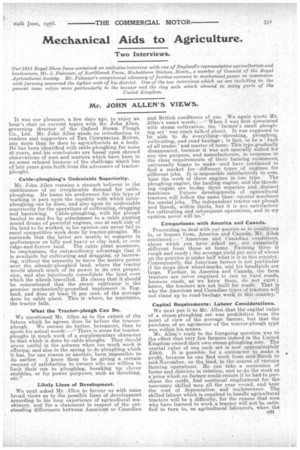 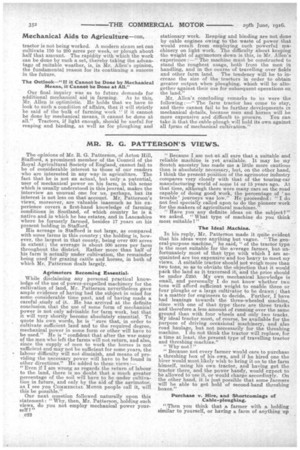 Our 1915 Royal Show Issue contained an exclusive interview with, one of England's representative agriculturists and landowners, Mr. T. Falconer, of _Northbrook Farm, Micheldever Station, Hants., a member of Council of the Royal Agricultural Society. Mr. Falconer's unequivocal advocacy of further recourse to mechanical power in connection with, farming concerned the lighter soils of his district. One of the two interviews which we are including in the present issue refers more particularly to the heavier and the clay soils which abound in many parts of the

It was our pleasure, a few days ago, to enjoy an hour's chat on current topics with Mr. John Allen, governing director of the Oxford Steam Plough Co., Ltd. Mr. John Allen needs no introduction to readers and supporters of THE COMMERCIAL MoTon, any more than he does to agriculturists as a body. He has been identified with cable-ploughing for some 40 years, and his conclusions are based upon shrewd observations of men and matters which have been in no sense relaxed because of the challenge which has of late years gone forth from the advocates of tractorploughs.

Mr. John Allen remains a staunch believer in the zontinuance of an irreplacable demand for cableploughing. He bases his preference for this type of working in part upon the rapidity with which cableploughing can be done, and also upon its undeniable superiority for the operations of cultivating, dragging and harrowing. Cable-ploughing, with the plough hauled to and fro by attachment to a cable passing round drums of powerful engines, one at each side of the, land to be worked, in his opinion can never fail to excel competitive work done by tractor-ploughs. He contends that the latter are unable to compete in performance on hilly and heavy or clay land, or over ridge-and-furrow land. The cable plant possesses, he emphasizes, the extraordinary advantage that it is available for cultivating and dragging, or harrowing, without the necessity to move the motive power over the .already-ploughed land, where the tractor would absorb much of its power in its own propulsion, and also injuriously consolidate the land over which the wheels travelled. He claims that it should be remembered that the steam cul,tivator is the premier mechanically-propelled implement in 'England, and does at least 75 per cent, of the acreage done by cable plant. This is where, he maintains, the tractor fails.

What the Tractor-plough Can Do.

We questioned Mr. Allen as to the extent of the future which he agrees does he before the tractorplough. We cannot do better, hereanent, than to quote his actual words :—" There is scope for tractorploughs in much work of a supplementary character to that which is done by cable-ploughs. They should prove useful in the autumn when too much work is offering, and also in the spring to do ploughing which it has, for one reason or another, been impossible to do earlier. I know them 'Co be giving a certain amount of satisfaction to owners who are willing to limit their use to ploughing, 'breaking up clover stubbles, or for power purposes, such as threshing, etc."

We next asked Mr. Allen to favour us with some broad views as to the possible lines of development according to his long experience of agricultural machinery, and for a statement in respect of the outstanding differences between American or Canadian

and British conditions of use. We again quote Mr. Allen's exact words :—" When I was first associated with steam cultivation, the farmer's small ploughing set ' was much talked about. It was supposed to be able to do everything—threshing, ploughing, cultivating, and road haulage ; in fact, to be a 'Jack of all trades' and master of none.This type gradually disappeared, because it was not specially suited for any one purpose, and manufacturers, in response to the clear requirements of their farming customers, universally began to make—and have continued to find a market for—different types of engines for different jobs. It is impossible satisfactorily to combine the work of three engines in one type. The ploughing engine, the hauling engine, and the threshing engine are to-day three separate and distinct machines. Future developments of agricultural tractors will follow the same lines—special machines for special jobs. The independent tractor can plough and thresh, within limits, but it is not satisfactory for cultivating and subsequent operations, and in my opinion never will be."

Comparisons with America and Canada.

Proceeding to deal with our queries as to conditions in, or lessons from, America and Canada, Mr. Allen continued :—" American and Canadian conditions, about which you have asked me, are essentiall3r different from those at home. Farming there is rough and ready ; the average yield per acre of wheat on the prairies is under half what it is in this country. Consequently, the American farmer is not particular if his crops show Wheel-marks, and his`headlands are large. Further, in America and Canada the farm tractors are never required to run on 'hard roads, because roads, as we know them, do not exist-; hence, the tractors are not built for roads. That is why the American and Canadian types of tractors will not stand up to road-haulage work in this country."

We next put it to Mr. Allen-that the capital value of a steam-ploughing set was prohibitive from the point of view of the average farmer, but that the purchase of an agrimotor of the tractor-plough type' was within his means.

. Mr. Allen's reply to the foregoing question was to the effect that very few farmers indeed in the United Kingdom owned their own steam-ploughing sets. The capital value of one such set is now approximately 23000. It is possible for a contractor to make a profit, because he can find work from mid-March to mid-November, on the land, in the course of various farming operations. He can take a succession of farms and districts in rotation, and so do the work at a price which no farmer could ensure if he had to purchase the outfit, find continual employment for the necessary skilled men all the year round, and bear the cost of depreciationand maintenance. The skilled labour which is required to handle agricultural tractors will be a difficulty, for the reason that men who have learned to work a tractor will not be satisfied to turn to, as agricultural labourers, when the

tractor is not being worked. A modern steam set can cultivate 150 to 200 acres per week, or plough about half that amount. The rapidity with which the work can be done by such a set, thereby taking the advantage of suitable weather, is, in Mr. Allen's opinion, the fundamental reason for its continuing a success in the future.

Our final inquiry was as to future demands for additional mechanical aid in farming. As to this, Mr. Allen is optimistic. He holds that we have to look to such a condition of affairs, that it will strictly be said of the bulk of farming work " if it cannot be done by mechanical means, it cannot be done at all." Tractors, if light enough, should be useful for reaping and binding, as well as for ploughing and stationary work. Reaping and binding are not done by cable engines owing to the waste of power that would result from employing such powerful machinery on light work. The difficulty about keeping the weight of agriraotors down is this, in Mr. Allen's experience :—" The machine must be constructed to stand the roughest usage, both from the men in handling, and in the course of travelling over fields and other farm land. The tendency will be to increase the size of the tractors in order to obtain greater output when ploughing, which will be altogether against their use for subsequent operations on the land."

Mr. Allen's concluding remarks to us were the following :—" The farm tractor has come to stay, and there cannot fail to be further developments in mechanical details,. because men and horses will be more expensive and difficult to procure. You can take it that the cable-plough will hold its own against all forms of mechanical cultivation."