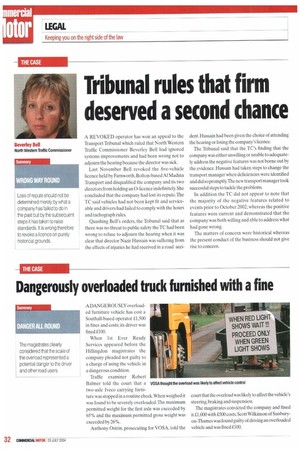 A REVOKED operator has won an appeal to the Transport Tribunal which ruled that North Western Traffic Commissioner Beverley Bell had ignored systems improvements and had been wrong not to adjourn the hearing because the director was sick.

Last November Bell revoked the five-vehicle licence held by Farnworth, Bolton-based Al Madina Transport and disqualified the company and its two directors from holding an 0-licence indefinitely. She concluded that the company had lost its repute. The TC said vehicles had not been kept fit and serviceable and drivers had failed to comply with the hours and tachograph rules.

Quashing Bell's orders, the Tribunal said that as there was no threat to public safety the IC had been wrong to refuse to adjourn the hearing when it was clear that director Nazir Hussain was suffering from the effects of injuries he had received in a road acci dent. Hussain had been given the choice of attending the hearing or losing the company's licence.

The Tribunal said that the TC's finding that the company was either unwilling or unable to adequately address the negative features was not borne out by the evidence. Hussain had taken steps to change the transport manager when deficiencies were identified and did so promptly.The new transport manager took successful steps to tackle the problems.

In addition the IC did not appear to note that the majority of the negative features related to events prior to October 2002, whereas the positive features were current and demonstrated that the company was both willing and able to address what had gone wrong.

The matters of concern were historical whereas the present conduct of the business should not give rise to concern.