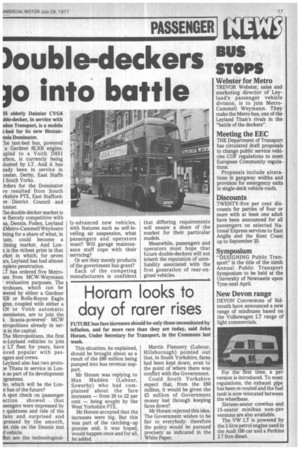 Page 19, 29th July 1977 — Horam looks to day of rarer rises
Close
Noticed an error?
If you've noticed an error in this article please click here to report it so we can fix it.
Keywords : John Horam, Wealden, Horam, Local Government In England, Counties Of England, West Yorkshire Passenger Transport Executive, Politics Of The United Kingdom, Politics

FUTURE bus fare increases should be only those necessitated by inflation, and far more rare than they are today, said John Horam, Under Secretary for Transport, in the Commons last week.

This situation, he explained, should be brought about as a result of the £80 million being pumped into bus revenue support.

Mr Horam was replying to Max Madden (Labour, Sowerby) who had complained about the fare. increases — from 20 to 22 per cent — being sought by the West Yorkshire PTE.

Mr Horam accepted that the increases were big. But this was part of the catchingup process and, it was hoped, would happen once and for all, he added. Martin Flannery (Labour, Hillsborough) pointed out that, in South Yorkshire, fares had been kept down, even to the point of where there was conflict with the Government.

Could South Yorkshire expect that, from the £80 million, it would be given the £5 million of Government money lost through keeping fares down?

Mr Horam rejected this idea. The Government wishes to be fair to everybody: therefore the policy would be pursued precisely as indicated in the White Paper.