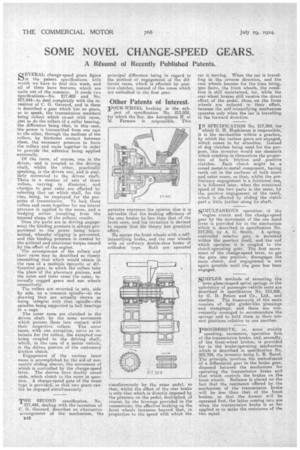 Page 30, 29th July 1924 — SOME NOVEL CHANGE-SPEED GEARS.
Close
Noticed an error?
If you've noticed an error in this article please click here to report it so we can fix it.

SEVERAL change-speed gears figure 111 the patent specifications with winch we have to deal this week, and all of them have features which are quite out of the common. It needs two specifications—No. 217,403 and No. 217,444—to deal completely with the invention of C. G. Garrard, and in them is described a gear which has no gears, so to speak, the transmission members being rollers which co-act with races, Just as do the rollers of a roller bearing, the difference being that, in this case, the power is transmitted from one race to the other, through the medium of the rollers, by frictional contact between them, the necessary pressure to force the rollers and races together in order to provide the adhesion being applied externally.

Of the races, of course, one is the driver, and is coupled to the driving shaft, whilst the other,. practically speaking, is the driven one, and is similarly connected to the driven shaft. There is a number of sets of these rollers, varying in diameter, and changes in gear ratio are effected by selecting that set which shall, for the time being, be employed for the pur

poses of transmission. To lock. those -I tillers and races together for use lateral pressure is applied to the races, and a wedging action (resulting from the tapered shape of this rollers) residts.

Once the parts are in driving engagement the binding pressure is always proportional to the power being transmitted, whereby slipping is prevented, and this binding pressure is created by the actional and reactional torque caused by the effort of the engine. The arrangement of the rollers and their races may be described as closely resembling that which would obtain in the case of a Multiple epicyclie or differential gear, in which the rollers take the place of the planetary pinions, and the outer and inner races the outer, internally cogged gears and sun wheels respectively.

The rollers are mounted in sets, side by side, on a common spindle—in the drawing they are actually shown as being integral with that spindle—the spindles being supported in ball bearings in a cage.

The inner races are clutched to the driven shaft by the same movement Which presses Chem into contact with their respective rollers. The outer races, with one exception, serve as retainers for the rollers, the excepted one being coupled to the driving shaft, which, in the ease of a motor vehicle, is the driven portion of the customary friction clutch.

Engagement of the various inner races is accomplished by the aid-of concentric sliding sleeves, the movement of which is controlled by the change-speed lever. The sleeves have doubly coned ends, which clutch to the races in question. A change-speed gate of the usual type is provided, so that two gears cannot be engaged simultaneously.

THE SECOND specification, No. 217,444, dealing with the invention of C. G. Garrard, describes an alternative arrangement of the mechanism, the principal difference being in regard to the method of engagement of the different races, which is effected by positive clutches, instead of the cones which are embodied in the first gear.

FOUR-WHEEL braking is the subject of specification No. 213,938, for which the Soc. des Aeroplanes H. et M. Farman is responsible. This patentee expresses the opinion that it is advisable that the braking efficiency of the rear brakes be less than that of the front ones, and his invention is devised to ensure that his theory has practical effect.

Ile equips the front wheels with a selfintensifying brake, and the rear wheels with an ordinary double-shoe brake of orthodox type. Both are operated

simultaneously by the Same pedal, so that, whilst the effect of the rear brake is only that which is directly imposed by the pressure on the pedal, multiplied, of course, by the leverage provided in the connections, the effective braking on the front wheels increases beyond that, in proportion to the speed with which the car is moving. When the car is travelling in the reverse direction, and the rear wheels become for the time being, ipso facto, the front wheels, the condition is still maintained, for, while the rear-wheel brakes still receive the direct effort of the pedal, those on the front wheels are reduced in their. effect, because the self-intensifying mechanism operates only when the car is travelling in the forward direction.

which a H. Hopkinson is responsible, it is the mechanism withina gearbox, by which the various gears are engaged, which comes in for attention. Instead

of dog clutches being used for the 'his inventor would use elements which combine in themselves the properties of both friction and positive clutches. Each clutch might be a coned metal-to-metal component, having teeth cut in the surfaces of both inner and outer cones, so that, whilst the preliminary engagement is a frictional one, it is followed later, when the rotational speed of the two parts is the same, by the positive engagement of the teeth, which is effected by sliding the clutch part a little farther along its shaft.

SIMULTANEOUS operation of the engine clutch and the change-speed gear by the movement of the one hand lever is provided for in the mechanism which is described in specification No.

217,293, by A. 0. Smith. A spring. controlled selector gate is mounted within the gearbox itself, and the rod which operates it is coupled to the clutch-operating gear. The first movement of the change-speed lever, to get the gate into position, disengages the main clutch, and engagement is not. again possible until the gear -has been engaged.

SIMPLER methods of mounting the

hour-glass-shaped spiral springs in the upholstery of passenger-vehicle seats are described in specification No. 216,956, by G. D. Peters and Co., Ltd., and another. The framework of the seats consists of light girder-like pressings and stampings, and these are conveniently arranged to accommodate the springs and to hold them in their correct positions relative to one another.