A PRECEDENT TO BE FOLLOWED. 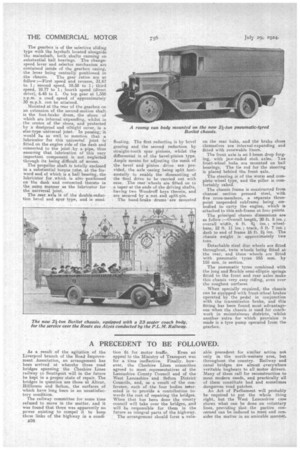 Page 20, 29th July 1924 — A PRECEDENT TO BE FOLLOWED.
Close
Noticed an error?
If you've noticed an error in this article please click here to report it so we can fix it.

As a result of the agitation of the Liverpool branch of the Eked Improvement Association, an arrangement has been arrived at whereby three road bridges spanning the Cheshire Lines railway to Southport will in the future be kept in a proper state of repair. The bridges in question are those at Altcar, Hillhouse and Sefton, the surfaces of which have long been in an unsatisfactory condition.

The railway committee for some time refused to move in the matter, and it was found that there was apparently no power existing to compel it to keep those links of the highway in a condi,

• n38 tion fit for motor traffic. Even an

appeal to the Ministry of Transport was for a time ineffective. Finally, however, the Cheshire Lines committee agreed to meet representatives of the Lancashire County Council and of the West Lancashire and Sefton District' Councils, and, as a result of the conference, each of the four bodies ist4erested is to provide a contribution towards the cost of repairing the bridges. When that has been done the county council will take over the bridges, and will be responsible for them in the finure as integral parts of the highway. The arrangement should form a valu

able precedent for similar action not only in the north-western area but throughout the country. Railway and canal bridges are almost everywhere veritable bugbears to all motor drivers. Many of them call for reconstruction to meet modern needs, and practically all of them constitute bad and sometimes dangerous road patches.

An Act of Parliament will probably be required to put the whole thing right, but the West Lancashire case shows what can be done on voluntary lines, providing that the parties concerned can be induced to meet and consider the matter in an amicable manner,