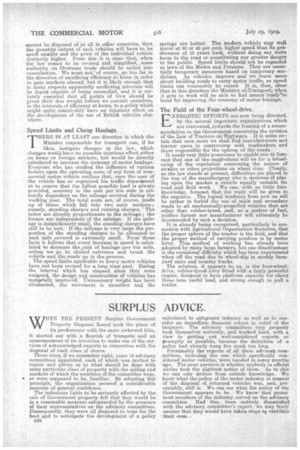 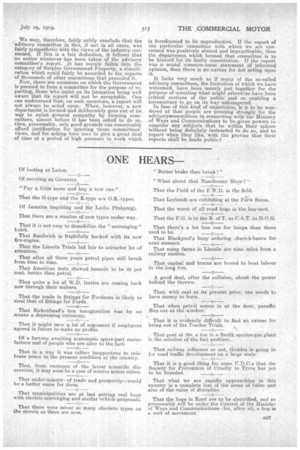 Page 2, 29th July 1919 — SURPLUS ADVICE.
Close
Noticed an error?
If you've noticed an error in this article please click here to report it so we can fix it.

WHEN THE PRESENT Surplus Government Property Disposal Board took the place of its predecessor with the same awkward title, it started out with a flourish of trumpets and an announcement of its intention to Make use of the services of acknowledged experts in ebnneetion with the disposal of each class of stores.

There were, if we remember right, seine 19 advisory committees appointed, each of -which was invited to report -and advise as to what should be done with scene particular class of property with the selling and markets of which the members of the committee weae, • or were supposed to be, familiar. By adopting this principle, the organization secured a considerable measure of general confidence.

The industries liable to be seriously affected by the sale of Government. property felt that they would be in a reasonable measureesafeguarded by the presence of their representatives on the advisory committees. Consequently, they were all disposed to hope for the best ,and to anticipate the development of a policy 1.126 calculated to safeguard industry as welt as to consider an immediate fmancial return in relief of the taxpayer. The advisory committees very properly took themselves seriously, and worked hard, with a, view to getting out well-considered reports as promptly as possible, because the definition of a policy had already hung fire much too long.

Presumably the reports of all these advisory COMmittees, including the one which specifically considered motor vehicles, were handed in many months ago. The next question is whether anybody in official circles took the slightest notice of them. As to this we can only deduce from outside knowledge. We know what the policy of the motor industry in. respect of the disposal of returned vehicles was, and, presumably, still is. We can see what the policy -of the Government appears to be. We know that prominent members of the industry served on the advisory committee. Had they been entirely dissatisfied with the advisory committee's -report,. we may fairly assume that they Would have taken steps tqventilate their case. e

• We may, therefore, fairly safely conclude that the 'advisory committee in this, if not in all cases, was 'fairly sympathetic with the views of the industry concerned. If this is a fair deduction, it follows that no notice whatever has been taken of the advisory committee's report. It has merely fallen into the category of Surplus Government Property, a classification which could fairly be accorded to the reports of thousands of other committees that preceded it. Now, there are occasions on which the Government is pressed to form a committee for the purpose of reporting, those who insist on its formation being well aware that its report will not be acceptable. One can understand that, on such occasions, a report will not always be acted upon. When, however, a new department is formed and deliberately goes out of its way to enlist general sympathy by forming committees, almost before it has been asked to do so, then, presumably, only good grounds can conceivably afford justification for ignoring those committees' views, and for asking busy men to give a great deal of time at a period of high pressure to work which is foredoomed to be unproductive. If the report of the particular committee with which we are concerned was positively absurd and impracticable, then the department which formed that committee is to

• be blamed for its faulty constitution. If the report NVa S. a sound common-sense statement of informed opinion, then there is no excuse for not acting upon it.

It looks very much as if many of the so-called advisory committees, the formation of which we have welcomed, have been -merely put together for the purpose of .muzzling what might otherwise have been critical sections of the public and so enabling a bureaucracy to go on its way unhampered.

In face of this kind of experience, is it to be wondered at that people are pressing strongly for the advisoryacommittees in connection with'the Ministry of Ways and Communications to be.given powers to consider any subjects that he within •their sphere without being definitely instructed to do BO, and to report when they like, with the proviso that their reports shall be made public?