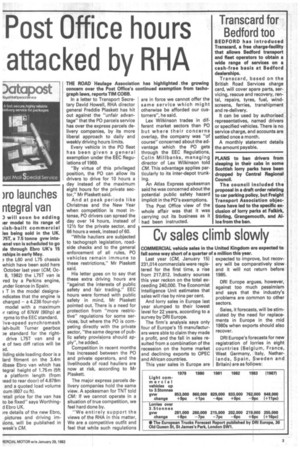 Page 5, 29th January 1983 — Post Office hours attacked by RHA
Close
Noticed an error?
If you've noticed an error in this article please click here to report it so we can fix it.
Keywords : Tachograph, Po, Plaskett

In a letter to Transport Secretary David Howell, RHA director general Freddie Plaskett has hit out against the "unfair advantage" that the PO parcels service has over the express parcels delivery companies, by its more liberal approach to daily and weekly driving hours limits.

Every vehicle in the PO fleet has been given a general exemption under the EEC Regulations of 1969.

"By virtue of this privileged position, the PO can allow its drivers to drive for 10 hours a day instead of the maximum eight hours for the private sector," Mr Plaskett said.

And at peak periods like Christmas and the New Year when competition is most intense, PO drivers can spread the day over 14 hours, instead of 121/2 for the private sector, and 66 hours a week, instead of 60.

"While hauliers are subjected to tachograph legislation, roadside checks and to the general enforcement of all rules, PO vehicles remain immune to these restrictions," Mr Plaskett said.

His letter goes on to say that these extra driving hours are "against the interests of public safety and fair trading." EEC hours were formed with public safety in mind, Mr Plaskett pointed out. There is a need for protection from "more restrictive" regulations for some services, but where the PO is competing directly with the private sector, "the same degree of public safety provisions should apply", he added.

Competition in recent months has increased between the PO and private operators, and the livelihoods of road hauliers are now at risk, according to Mr Plaskett.

The major express parcels delivery companies hold the same view. A spokesman for TNT told CM: If we cannot operate in a situation of true cornpetition, we feel hard done by.

"We entirely support the views of the RHA in this matter, We are a competitive outfit and feel that while such regulations are in force we cannot offer the same service which might otherwise be afforded our customers", he said.

Lax Wilkinson trades in different market sectors than PO but where their concerns overlap, the company was "of course" concerned about the advantage which the PO gets through the EEC Regulations, Colin Millbanks, managing director of Lex Wilkinson told CM. This advantage applies particularly to its inter-depot trunking.

An Atlas Express spokesman said he was concerned about the potential public safety hazard implicit in the PO's exemptions.

The Post Office view of the whole affair was that it was carrying out its business as it had been instructed.