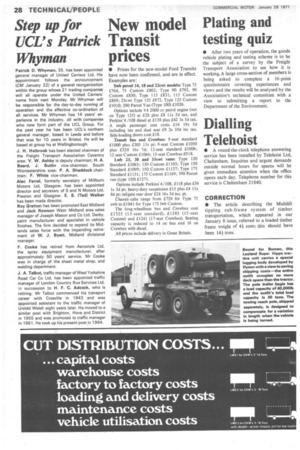 Page 30, 29th January 1971 — Step up for UCE s Patrick Whyman
Close
Noticed an error?
If you've noticed an error in this article please click here to report it so we can fix it.
Keywords : Crosville Motor Services

Patrick D. Whyman, 35. has been appointed general manager of United Carriers Ltd. His appointment follows the announcement (CM January 22) of a general reorganization within the group whose 21 trading companies will all operate under the United Carriers' name from next Monday. Mr Whyman will be responsible for the day-to-day running of operation and the effective co-ordination of all services. Mr Whyman has 14 years' experience in the industry, all with companies who now form part of the UCL Group. For the past year he has been UCL's northern general manager, based in Leeds and before that was for 10 years in Bristol. He will be based at group hq at Wellingborough.

F. Cooke has retired from Aerostyle Ltd, the spray equipment manufacturer, after approximately 50 years service. Mr Cooke was in charge of the sheet metal shop, and welding department.

J. A. Talbot, traffic manager of West Yorkshire Road Car Co Ltd, has been appointed traffic manager of London Country Bus Services Ltd. in succession to H. F. C. Adcock, who is retiring. Mr Talbot commenced his transport career with Crosville in 1943 and was appointed assistant to the traffic manager of United Welsh eight years later. He moved to a similar post with Brighton, Hove and District in 1955 and was promoted to traffic manager in 1961. He took up his present post in 1964.