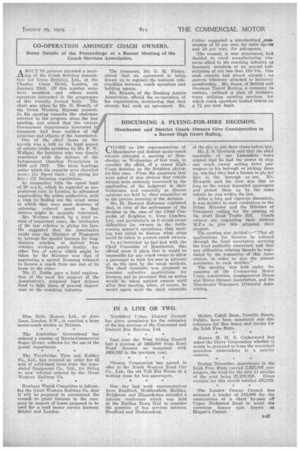 Some Details of the Proceedings at a Recent Meeting of the Coach Services Association.

ABOUT 50 persons attended a meeting of the Coach Services Association (of Great Britain), Ltd., at the Charing Cross Hotel, London, on January 23rd. Of this ammber some were members and others coach operators interested in the programme of this recently formed body. The chair was taken by Mr. G. Nowell, of the Great Western Express concern. In his opening remarks the thairnaan referred to the progress since the last meeting, and stated that the various Government departments interested i transport had been notified of t existence and objects of the Associatiod.

One of the chief items on the agenda -was a talk on the legal 'aspect of certain traffic problems by Mr. F. W. Wallace; the barrister who was closely associated with the defence of the Independent Omnibus Proprietors in 3926 and 1927.. The three headings under which his remarks were classified were : (1) Speed limit ; (2) plying for hire ; (3) licensing regulations.

In connection with the speed limit of 20 m.p.h., which he regarded as preposterons even in London, he advocated approaching the police authorities with a vie* to finding out the exact areas in which they were most desirous of enforcing reduced speed so that drivers might be specially instructed.

Mr. 'Wallace traced, by a brief recital of important cases, the intricacies of the .law .relative to plying for hire. He suggested that the Association might urge the Minister of Transport to arrange for special licences for longdistance coaches, as distinct from vehicles working purely locally. Another line of action which might be taken by the Minister was that of appointing a special licensing tribunal to licence a coach from one end of its route to the other.

Mr. C. Dobbs gave a brief explanation of the need for support of the Association's proposed legal defence fund to fight cases of general importance to the coaching industry. The ;treasurer, Mr. G. M. Finlay, stated that an agreement is being. drawn up to regulate the business relationships between coach operators and booking agents.

Mr. Benson, of the Booking Agents Association, offered the co-operation of his organization, mentioning that they already had such an agreement. Mr. Collier suggested a standardized .coms mission of 15 per cent. for main agents and 10 per cent, for sub-agents.

The council, it was announced, had decided to enrol manufacturing cOnculls allied to the coaching industry as honorary members at an annual subscription of not less than £10 10s. One such concern had joined already ; no Powers whatever attached to honorary membership. Mr. Jones, of British and Overseas Travel Service, a company in embryo, outlined a plan of inclusive tours utilizing existing services, for which coach operators booked tickets on a 74r per cent. basis.