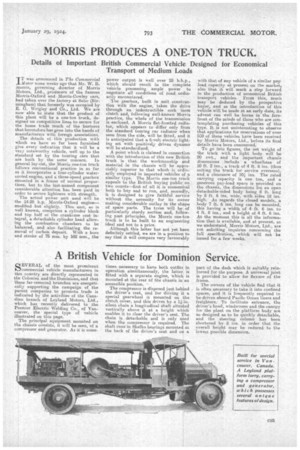 IT was announced in The Commercial .Motor some weeks ago that, Mr. W. It. -.i■lorris, governing director of Morris Motors Ltd., .producers of the famous Morris-Oxford and Morris-Cowley ears, had taken over the factory at Soho (Birmingham) that formerly was occupied by E. G. Wrigley and Co., Ltd. We are now able to state that the product of this plant will be a one-ton truck, designed on competitive lines to secure for the home trade much of the business that heretofore has gone into the hands of manufacturers with foreign associations.

The details of this production with which we have so far been furnished give every indication that le will be a very noteworthy vehicle, well up to the standard set by the touring cars that

are built by the same concern. In general lay-out, the Morris one-ton truck -follows conventional practice in so far as it incorporates a four-cylinder watercooled engine, and a three-speed gearbox mounted in a frame of normal proportions, but to the last-named. component considerable attention has been paid in order to secure lightness with strength.

The actual power unit used will be the 14-28 h_p. Morris-Oxford engine— modified but slightly. This unit, as is well known, comprises a cylinder block and top half of the crankcase cast integral, a detachable cylinder head allowing the combustion chambers to be balanced, and also facilitating the removal of carbon deposit. With a bore and stroke of 75 mm. by 102 mm., the power output, is well over 28 b.h.p., which should result in the complete vehicle possessing ample power to negotiate all conditions of road ordinarily encountered.

The gearbox, built in -unit construction with the engine, takes the drive through an indestructible cork inset clutch and, following well-known Morris practice, the whole of the transmission is enclosed. A Morris flat-fronted radiator, which appears to differ only from the standard touring car radiator when seen from the. side, will be fitted, and it is anticipated that a 6-volt electric lighting set with po,sitivel,y driven dynamo will be standardized.

A point which is claimed in connection with the introduction of this new British. truck is that the workmanship and material in the chassis will be appreciablysuperior to that which is ordinarily employed in imported vehicles of a similar type. The Morris one-ton truck appeals to the British buying public on two counts—first of all it is economical both to buy and to run, and, secondly, it is designed to give faithful service without the necessity for its owner making considerable outlay in the shape of spare parts. The tyres -will be of particularly sturdy section and, following past principles, the Morris one-ton truck is to be built to an engineering ideal and not to a price. Although this latter has not yet been definitely settled, we are in a position to say that it will compare very favourably with that of any vehicle of a similar pay, load capacity at present on the market, also that it will mark a step forward in the production of economical British transport vehicles. From this, much may be deduced by the prospective buyer, and as the introduction of this vehicle will be made at an early date, its advent can well be borne in the forefront of the minds of those who are contemplating purchasing vehicles of this type. It is not uninteresting to observe that applications for reservations °lover 5C0 of these vehicles have been received by Morris Motors, Ltd., before its final details have been announced.

To go into figures, the net weight of the truck with a light body will be 20 cwt., and the important chassis dimensions include a wheelbase of 10 ft. 2 ins., a track of 4 ft. 8 ins. (thus suiting the truck for service overseas), and a clearance of 101 ins. The rated carrying capacity is one ton, and a generous pay-load space is provided on the chassis, the dimensions fog, an open detachable-sided body being 8 ft. long by 5 -ft. 6 ins, wide, with sides 18 ins. high. As regards the closed models, a body 7 ft. 6 ins, long can be mounted, this having a width of 4 ft. 6 ins, to 4 ft. 8 ins., and a height of 4 ft. 6 ins. At the moment this is all the information that is available, and at present, so we understand, Morris-Motors, Ltd.; are not soliciting inquiries concerning the full specification, which will not be issued for a few weeks.