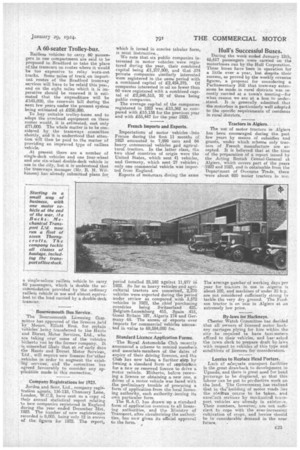 Page 7, 29th January 1924 — French Imports and Exports.
Close
Noticed an error?
If you've noticed an error in this article please click here to report it so we can fix it.

Importations of motor vehicles into France during the first 11 months of 1923 amounted to 7,999 cars and 84 heavy commercial vehicles and agricultural. tractors. In the latter class, the two chief countries of origin were the United States, which sent 41 vehicles, and Germany, which sent 27 vehicles; only one commercial vehicle was imported from England. Exports of motorcars during the same

• • The Royal Automobile 'Club recently announced a scheme to remind members and associate-members of the' dates of expiry of their driving licences, and. the Club has now taken a further step by isening a, standard form of rsaplication for a new or renewed licence to drive a motor vehicle. Hitherto, before renewing a licence or obtaining a new one, a driver of a motor vehicle was faced with the preliminary trouble of procuring a form of application from the local licensing authority, each authority,iss-aing its own particular form.

The R.A.C. has drawn up a standard form of application commcn to all licensing authorities, and the Ministry of Transport, after circularizing the authorities, has now given its official approval to the form.