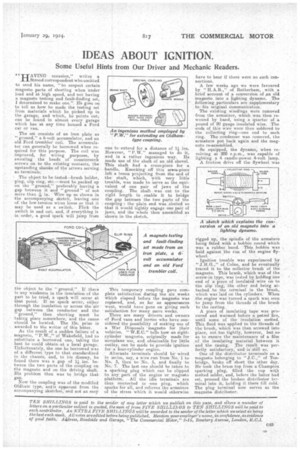 Page 33, 29th January 1924 — IDEAS ABOUT IGNITION.
Close
Noticed an error?
If you've noticed an error in this article please click here to report it so we can fix it.

Some Useful Hints from Our Driver and Mechanic Readers.

" T_TAV1NG occasion," writes a 1AStrood correspondent who omitted to send his name, "to suspect certain magneto parts of shorting when under load and at high speed, and not having a magneto testing and fauk-findirtg set, I determined to make one." He goes on to tell us how he made the testing set Irons materials which he picked up in the garage, and which, he points out can be found in almost every garage which has at any time housed a Ford car or van.

The set consists of an ironplate as "ground," a 6-volt accumulator, and au oldFord trembler' coil. The acoomulator can generally be borrowed when required for this purpose. The coil was improved, for wiring purposes, by sweating the heads of countersunk screws on to the existing contacts, the upstanding shanks of the screws serving, as terminals.

The object to be tested—.brush holder, plug, di! ring, etc.—must be packed up on the "ground," preferably leaving a gap between it and "ground" of not

more than in. Wire up as shown in the accompanying sketch-, leaving one of the low-tension wires loose so that it may be used as a switch. Flick the switch in and out, and, if everything is -in order,a good spark will jump from

the object to the " ground." If -there is any weakness in the insulation of the part to be tried, a spark will occur at that point. If no sparkoccur, either through the insulation or across the air gap . between the conductor and the "ground," then shorting must be taking place somewhere, and the cause should be located. The 15s. prize is awarded to the writer of this letter.

As the result of a sudden failure of a magneto, "P.W.," of Wakefield, had to substitute a borrowed one, taking the best he could obtain-at a local garage. Unfortunately, the one he borrowed was of a different type to that standardized in the chassis, and, to his dismay, he found there was a gap of 14, ins, between the two parts of the coupling on the magneto and on the driving shaft. His problem then was to bridge that gap.

Now the coupling was of the modified Oldham type, asiis appateent from the accompanying sketches, and not an easy one to extend for a distance of 11 ins. However, "P.W." managed to do it, and in a rather ingenious way. He made use of the shaft of an old shovel. TM's shaft had a cross-piece for a handle. Knocking off this aress-piece left a tenon projecting from the end of the shaft, which, with very little trouble, was made to 'serve as the equivalent of one pair of jaws of the coupling. The shaft . was cut to the right length to . enable it to bridge the gap between the two parts Of the coupling the-plain end was slotted so that it would tightly engage one pair of jaws, and the 'whole then assembled as shown in the sketch.

• This temporary coupling gave complete satisfaction daring the six weeks Which elapsed before the magneto was replac-ed, and, so. far as appearances went, would have gone on giving such satisfaction for many more weeks.

There are many drivers and owners of Ford vans and lorries who have considered the possibility of making use of a War Disposals magneto for _their vehicles. "W.E.C." tells how an eightcylinder magneto, originally made for -aeroplane use, and obtainable for little outlay, can be made tOprovide ignition for a four-cylinder engine.

Alternate terminals should b& wired in Series, say, a wire rart"from No. 1 to No. 3, then to No. 5, and finally to No. 7. The last one should be taken to a sparking plug which oan be clipped to any. part of the engine or magneto platform. All the idle terminals are thus connected to -one plug, which sparks for all, and relieves the armature of the stress which it would otherwise

have to bear if there were no such conmectiona.

A few weeks ago we were favoured by "H.A.B.," of Rotherham, with a brief account of a conversion of An old Magneto into a lighting dynamo. The following_ particulars are supplementary to his original communication.

The existing windings were removed from the armature, which was then rewound by hand, using a quarter of a pound of 20 gauge insulated wire. The ends of this we were then soldered to the collecting ring—one end to each ring. The condenser was removed, the armature put back again and the magneto re-assembled.

So equipped, the dynamo, when revolving at 200 r.p.tn., was capable of lighting a 4 candle-power. 4-volt lamp. A friction drive off the flywheel was rigged up, the spindle of the armature being fitted with a bobbin round which was a rubber band. Thu bobbin was held against the rim of the engine flywheel.

Ignition trouble was experienced by ."J.H.G.," of Colne, and he eventually traced it to the collector brush of the magneto. This brush, which was of the screw-in type, was tested by holding one end of a piece of insulated wire on to the slip ring, the other end being attached to the terminal in the biush, which was laid on the cylinders.When the engine was turned a spark was seen to jump from the threads of the brush 'to the casting. • A piece of insulating tape was procured and warmed before a petrol fire, until some of the insulation melted. This fluid was applied to the threads of the brush, which was then screwed into place, not too tightly, however, but so as to ensure the maintenance of a film of the insulating' material between it and the casing. The result was perfectly satisfactory; and is still so. -One of the distributor terminals on a magneto belonging to "J.C.," of Tonbridge, broke off short the other day. He took the brass -top from a Champions sparking plug, filled the cup wiLli melted solder, and, before the latter had set, pressed the brokendistributor terminal into it, holding it there till cold. The plug terminal now serves as the m-aaneto distrilautor.