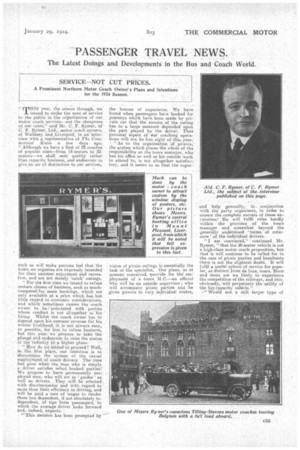 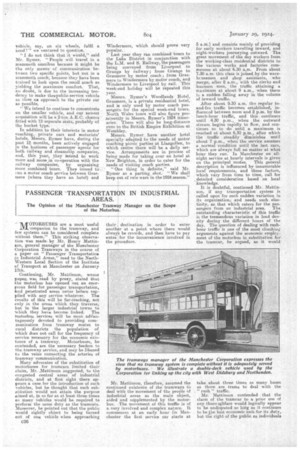 Page 19, 29th January 1924 — • SERVICE—NOT CUT PRICES.
Close
Noticed an error?
If you've noticed an error in this article please click here to report it so we can fix it.
Keywords : Westmorland, Windermere, Coach, Grasmere

A Prominent Northern Motor Coach Owner's Plans and Intentions for the 1924 Season.

"'TH"year, the season through, we intend to strike the note of service to the public in the org'anization Of our motor coach, services—not the cheapness of our rates," said Mr. C. F. Ilynier, of • • C. F. Rymer; Ltd., motor coachowners, of Wallasey and Liverpool, in an interview with a representative -of The Colninereial Motor a few days' ago. " Although we have a fleet of 22 coaches' of popular sizes—from 14-seaters to 32seaters—we shall seek quality . rather than capacity business, and endeavour to give. an air of distinction to our services, such as will make patrons feel that the tours_we organize are expressly intended for their summer enjoyment and recreation, and are not Merely 'catch' outings.

"For tilt first time we intend to refuse certain classes of business, such as muchcompeted-for mass bookings, which are only available at a price which.has but little regard to economic considerations, and which sometimes causes the coach owner to be; associated with parties -whose conduct is not altogether to•:his liking. Whilst the coach owner has to depend upon his summer revenue for his winter livelihood,' it is not always easy, or possible, for him to refuse 'business, but this year: we propose to take the plunge and endeavour to raise the status. of the industry to a higher plane. " How do we intend to .proceed ? Well, in: the first place,' our. Intention is to discontinue the system of the casual employinent of-coach drivers. The timehas gone -when" the man who is simply

a driver satisfies selectbooked parties: We propose to. have, permanently eri4. ployed men, who will act as guides ' as; well as drivers. . They _willbe selected with discrimination and with.regard to more than their efficidney in driving, and-will be paid a rate of wages to render them less dependent, if not absolutely independent, of tips from passengers, to which the average driver looks forward and,. indeed, expects.

"This decision has been prompted by

the lessons of .experience. We have found when passengers have booked for journeys which have been made by pri-yate car that the success of the outing has ina large measure depended upon the part .played by: the driver. Thai personal aspeot -of ear coaching operations will not be lost; sight of this year: "As to the organization • of *picnics,. the system which places the whole of the responsibility on the tours nianager, who has his office as well as his outside Work to attend to, is not altogether satisfactory, and it seems to us that the super;

. vision of picnic outings is essentially the task ofthe specialist. Our plans, as at present conceived, 'provide for thd employment Of a tours M.C.—an official who will be an outside supervisor ; who will accompany picnic parties and be given powers to vary individual routes,

and help generally, in&injunction with the party organizers, in order to ensure the complete success of -these excursions: He will fulfil roles hardly Within the province of the tours manager . and somewhat beyond the generally understood 'terms of reference' of the individual drivers.

"I am convinced," continued Mr. Rymer; "that the 30-seater vehicle is not a high-class motor coach proposition, but • that it, will continue to be called for in the case ofpicnic parties and beanfeasts there is not the slightest doubt. It will fulfil a useful sphere of service for popular, as distinct from de luxe, tours. More. and more are we likely to experience the competition of the railways, and this. obviously, will perpetuate the utility of the big-capacity vehicle."

WaRld not a still larger type of vehicle, say, on six wheels, fulfil a need?" we ventured to question.

" I do not think that it would," said Mr. Rymer. " People will travel in a mammoth omnibus because it might be the only means • of communication between two specific points, but not in a mammoth coach, because they have been trained to took upon the small coach as yielding the maximum comfort. That, no doubt, is due to the increasing tendency to make thef public-service vehicle as close an approach to the private ear as possible.

"We intend to continue to concentrate en the smaller vehicle, and our newest acquisition will be a 2-ton A.E.C. chassis fitted with 1_2 separate seats, probably of the bucket type.

In addition to their interests in motor coaching, private cars and motorists' hotels, Messrs. Rymer have, during the past 12 months, been actively engaged in the business of .passenger agents for Loth railway and .steamship companies; and, this year, they intend to work more and more in co-operation with the railway companies, by organizing more combined tours. They intend to inn a motor coach service between Grasmere (where they have an hotel) and Windermere, which should prove very popular. Last year they ran combined• tours to the Lae District in conjunction with the L.M. and S. Railway, the passmigers being conveyed from Liverpool to Grange by railway; from Grange to Grasmere by motor coach; from Grasmere to Windermere by. motor coach, and Windermere to Liverpool by rail. This week-end holiday will be repeated this year. Messrs. Itymer's Woodlands Hotel, Grasmere, is a private residential hotel, and ie only used by motor coach passengersfor the special week-end tours. North Wales tours will also figure pre-: minently in Messrs, Rymer's 1924 itineraries. There will also be long-distance runs to the British Empire Exhibition at Wembley. Messrs. Rymer. have another hotel specially adapted to the needs of motor coaching picnic parties at Llangollen, to which centre there will he a daily service. Arrangements are in process of being made for taking over an hotel at New Brighton, in erder to eater for the needs of visiting coach parties. " One thing is definite," said Mr. Byrner as a parting shot. " We shall keep out of rate wars in the 1.924 season."