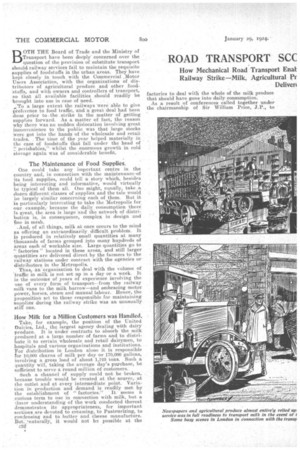 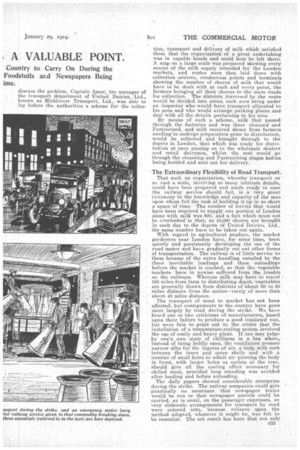 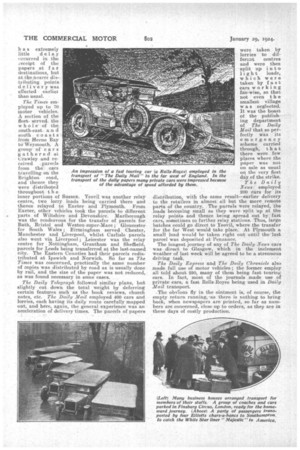 Page 16, 29th January 1924 — ROAD TRANSPORT SCC A. VALUABLE POINT.
Close
Noticed an error?
If you've noticed an error in this article please click here to report it so we can fix it.

BOTH THE Board of Trade and the Ministry of Transport have been deeply" concerned over the question of the provision of substitute transport should. railway services fail to maintain the requisite supplies of foodstuffs in the urban areas. They have kept closely in touch with the Commercial ,Motor Users Association, with the organizations of distributors of agricultural produce and other foodstuffs, and with owners and controllers of transport, so that all available facilities .should readily be brought into use in ease of need. . .

To a large extent the railways were able to give pi.efeience to food traffic, and -a, great deal had been done prior tothe strike in the matter of getting supplies forward. As a matter of fact, the reason why there was no sudden dislocation involving great inconvenience to the public was that large stocks were got into the hands of the wholesale and retail trades. . The time of the year helped materially in the case of foodstuffs that fall under the had of e". perishables,"whilst the enormous growth in cold storage again was of considerable benefit.

The Maintenance of Food Supplies.

One could ta-ke any important centre in the country and, in connection with the maintenance-of its food supplies, could tell a story which, besides being interesting and informative, would virtually be typical of them all. One might, equally, take .a dozen different classes of supplies and the tale would be largely similar concerning each of them. But it Is particularly interesting to take the 'Metropolis for our example, because the daily, consumption there is great, the area is large 'and the network of distrie bution is, in consequence, Complex in design and fine in mesh.

-And, of all things, milk at once occurs to the mind is offering an extraordinarily difficult problem. It is produced in relatively small quantities at many thousands of farms grouped into many hupdreds of areas each of workable size. Large, quantities go to " factories" located in these areas, and still larger quantities are delivered direct by the farmers to the railway stations under contract with the agencies or distributors in the Metropolis.

Thus,. an organization to deal with the volume of 'traffic in milk is not set up in a day or a week. It is the outcome of years of experience involving the use of every form of -transport—from the railway milk vans to the milk barrow—and embracing motor .power, horses, steam and manual labour. Hence, the 'proposition set to those responsible for maintaining supplies during the railway strike was an unusually stiff one.

How Milk for a Million Customers was Handled.

Take, for example, the position of the United Dairies, Ltd., the largest agency dealing with dairy produce. It is under contracts to absorb the milk produced at a large number of farms and to distribute it to certain wholesale and retail dairymen, to hospitals and various organizations and institutions. For distribution in London alone it is responsible or 10,000 churns of milk per day or 170,000 gallons, involving a gross load of about 1,125 tons. Such a quantity will, taking the average day's pu,rehase, ho sufficient to serve a round million of customers.

Such a channel of supply could not be broken, because trouble would be created at the source, at the outlet and at every intermediate point. Variation in production and demand is readily met by the establishment of "factories." It seems a .curious term to use in connection with milk, but a, loser understanding of the work conducted thereat demonstrates its appropriateness, for important sections are devoted to creaming, to Pasteurizing, to condensing and to butter and cheese manufacture. But.".enaturally, it would not be possible at the cac2 tion, transport and delivery of milk which satisfied them that. the organization of a great undertakingwas in capable hands and could best be left there. A map on a large scale was prepared showing every source of the milk supply intended for the London markets, and routes were then laid down with collection .centres, rendezvous points and terminals showing the number of churns of milk that would have to be dealt with at each and every point, the farmers bringing all their churns to-the main roads for collection. The districts traversed by -the route would be divided into areas, each area being under an inspector who would have transport allocated tohis area and who would arrange parking places and deal with all the details pertaining to his area-.

By means of such a scheme, milk that passed through the factories and was there cleansed and Pasteurized, and milk received direct from farmers needing:to undergo preparation prior to distribution, would be collected and 1a-fought through to the depots in London, that which was ready for distribution at once passing on to the wholesale dealers and retail dairymen, whilst the rest would go through the cleansing and Pasteurizing stages before being. bottled and sent out for delivery. ,

The Extraordinary Flexibility of Road Transport.

That such an organization, whereby transport on so vast a scale, involving so many intricate details, could have been prepared and made ready in ca-se the railway service should fail, is a very, great testimony to the knowledge and capacity of the men upon whom fell the task of building it up in so short a' space of time. The number of lorries that would' have been required to supply one portion of London alone with milk was 600, and a fact which Must not be overlooked 'is' that, as 10,000 churnsare brought in each day to the depots ofUnited Dairies, Ltd.; the samenumber have to be taken out again. • With regard to agricultural produce, the market gardeners near London have, for 'some time, been quietly and persistently developing the use of the road motor and have gradually cut out other forms. of transportation. The railway is of little service to them because Of the extra handling entailed by the three inevitable loadings and three unloadings before the market is reached, so that the vegetable markets 'have in nowise suffered from the trouble on the railways. Whereas Milk may have to travel 150 miles from farm to distributing depot, vegetables. are generally drawn from districts of about 20 to 25 • miles distance from the centre—rarely of more than about 40 miles distance.

The transport of meat to market has not been affected, but consignments to the country have gone more largely by road daring the strike. We have heard one or two criticisms of manufacturers, based upon their failure to produce a good insulated -van, . but were fain to point out to the critics that the installation of a temperature-cooling system involved the uee of costly and heavy plant. If one may judge by one's own state of chilliness in a bus where, instead of being boldly open, the ventilators present narrow slits for the ingress of air, a 'body with cork between the inner and outer shells and with a number of small holes.to admit air piercing the body in front, with larger hales as outlets at the rear, should give all the cooling effect necessary for chilled meat, provided long standing was avoided after loading and before unloading.

The daily papers showed considerable enterprise during the strike. The railway companies could give ` practically no assurance that newspaper trains would be run or that newspaper parcels could be carried, as is usual, on the passenger expresses, so very elaborate arrangements for transport by road were entered into, because reliance upon the method adopted, whatever it might be, was felt to be essential. The net result has been that not only , h a s extremely little delay occurred in the i'eccipt of the papers at f a r destinations, but at the nearer distributing points delivery was effected earlier than usual.

The Times employed up to 70 motor vehicles. A section of the fleetserved the whole of the south-east. a .n d south coasts from Herne Bay to Weymouth. A group of cars gathered at Crawleyandreceived parcels horn the cars travelling on the Brighton road, and thence they were distributed throughout t h e inner portions of Sussex. Yeovil was another relay centre, two lorry loads being carried there and thence relayed to Exeter and Plymouth. From Exeter, other vehicles took the parcels to different parts of Wiltshire and Devonshire. Marlborough was the rendezvous for the transfer of parcels for Bath, Bristol and Weston-super-Marc; Gloucester for South Wales ; Birmingham served Chester, Manchester and Liverpool, whilst Carlisle parcels also went via Liverpool ; Leicester was the relay centre for Nottingham, Grantham and Sheffield, parcels for Leeds being transferred at the last-named city. The Eastern Counties had their parcels redistributed at Ipswich and Norwich. So far as The Times was concerned, practically the same number of copies was distributed by road as is usually done by rail, and the size of the paper was not reduced, as was found necessary in some cases.

The Daily Telegraph followed similar plans, but slightly cut down the total weight by deferring certain features such as the book reviews, church notes, etc. The Daily Mail employed. 400 cars and lorries, each having its daily route carefully mapped out, and. here, again, the general experience was an acceleration of delivery times. The parcels of papers were taken by lorries to different centres and were then split up into light loads, which were taken by fast cars working fan-wise, so that not even the smallest village w a s neglected. It was the boast of the publishing department of The Daily Mail that so perfectly was its emergency scheme carried through, that there were few places where the piper was not on sale as usual on the very first cla:y of the strike.

200 cars for its distribution' with the same result—earlier delivery to the retailers in almost all but the more, remote parts of the country. The parcels were relayed, the loads becoming small as they were split .up at the relay points and thence being spread out by: cars, sometimes to further relay stations. Thus, large batches could go direct to Yeovil, where the transfer for the far West would take place: At Plymouth a small load would he taken right out until the last parcel was deposited at Penzance.

The longest journey of any of The Daily News cars was direct to Glasgow, which in the inclement weather of last week will be agreed to be a strenuous driving task.

The Daily Express and The Daily Chronicle also made full use of motor vehicles ; the former employ all told about 250, many of them being fast touring cars. In fact, most of the journals made use of private cars, a fast Rolls-Royee being used in Daily Mail transport.

-The obVions fly in the ointment is, of course, the empty return running, .as there is nothing to bring back, when newspapers are printed, so far as M1111hers are _concerned, close up to orders, as they are in these days of costly production.