THE FRENCH PLOUGH AND TRACTOR SHOW. 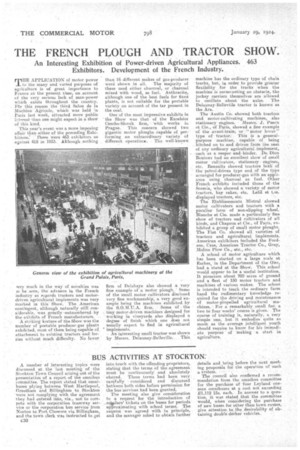 An Interesting Exhibition of Power-driven Agricultural Appliances. 463 Exhibitors. Development of the French Industry.

THE APPLICATION of motor power to the many and varied purposes of agriculture is of great importance to France at the present time, on account of the very serioue lack of man-power which exists throughout the country. Pm this reason the third Salon de la Machina 'Agricele, which was held in Paris last week, attracted more public interest than one might expect in a show of this kind.

rery much in the way of novelties was be seen, the advance in the French industry as regards tractors and motordriven agricultural implements was very marked in this Show. The, American contingent, although naturally still considerable, was ,greatly • outnumbered by the eXhibits of French manufacturers.

A striking isature of the Show was the number of portable producer-gas plants exhibited, most of them being capable of attachment to existing tractors and' lorries without much difficulty. No fever than 16 different makes of gas-producer were shown in all. The majority of these used either charcoal, or charcoal mixed with wood, as fuel. Anthracite, although one of the best fuels for fixed plants, is not suitable for the portable variety on account of the tar present in the coal.

One of the most impressive exhibits in the Show was that of the Excelsior Czecho-Slovak firm, with works in Prague. This concern. showed two gigantic motor ploughs. capable of performing an extraordinary variety of different operatioiem. The well-known

firma of Delahaye also showed a very fine example of a motor plough. Some of the small motor cultivators disclosed very fine workmanship; a very good example being the machines exhibited by the S.O.M.U.A. firm. Some of the , tiny motor-driven machines designed for working in vineyards also displayed a degree of finish which one does not usually expect to find in agricultural • implements. An interesting small tractor was shown by Messrs. Delaunay-Belleville. This machine has the ordinary type of chain tracks, but, in order to provide greater flexibility for the tracks when the machine is surmcunting an obstacle, the jockey carriers themselves are allowed to oscillate about the axles. The Delauttay-Belleville tractor is known as the Ara.

The Austin Co. showed both tractors and motor-cultivating machines, also

stationary engines. Messrs. J. Puecia et.Cie., of Paris, showed a fine example of the avant-train, or t` Motor horse" type of tractor. This is a generalpurpose machine, capable of being hitched on to and driven from the seat of any ordinary agricultural implement, such as a reaper and-binder. De, Dion Boutoms had an excellent show of small motor Cultivators, stationary engines, etc. Renaults showed tractors bothof the' petrol-driven type and, of the type arranged for producer-gas With an appliance using charcoal as fuel. Other French exhibits included those of the Seemia, who showed a variety of motor tractors, hay rakes, etc. Leta at Lae. displayed tractors, etc.

The Etablissements Mistral showed motor cultivators and tractors with a p'eculiar form of non-slipping wheel. Blanche at Cie. made a particularly fine show of tractors and cultivators of all kinds, and Chapron at Cie., of Paris, exhibited a group of small motor ploughs. The Fiat Co. showed all varieties of tractors and agricultural implements. American exhibitors included the Ford' son, Case, American Tractor Co., Gray, Moline Plow Co., etc., etc.

A school of motor agriculture which has been started on a large scale at Esches, in the Department of the Oise, had a stand at the Show. This school would appear to be a useful institution. It pessesses about 700 acres of ground and a fleet of 150 motor tractors and machines of various makes. The school is intended to teach the ordinary farm hand the rudimentary knowledge required for tjmi driving and maintenance of motor-propelled • agricultural machines. • For a remarkably small fee, a two to four weeks' course is given. The course of training is, naturally, a very simple one, but it embodies quite as much as the average intelligent youth should require to know for his immediate purpose of making a start in agriculture.