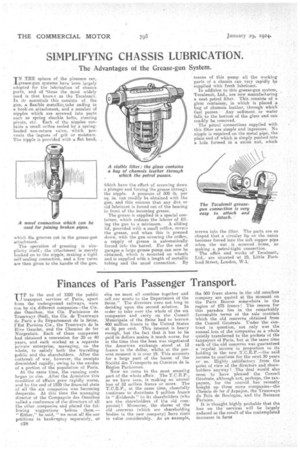 Page 12, 29th January 1924 — Finances of Paris Passenger Transport.
Close
Noticed an error?
If you've noticed an error in this article please click here to report it so we can fix it.
Keywords : Paris, Europe, Business / Finance

TT", to the end of 1920 the public J transport services of Paris, apart fvoin the underground railways, were run by six different companies—the Cie. des Omnibus, the Cie. Parisienne de Tramways (Sud), the Cie. de Tramways de Paris e du Departement de la Seine, l'Est Parisian Cie., the Tramways de la Rive Gauche, and the Chemins de fer Norgentais. Each of these companies had obtained a concession for 50 or 40 years, and each worked as a separate private enterprise, managing, on the whole, to satisfy both the travelling public and the shareholders. After the outbreak of war, however, the receipts diminished rapidly, owing to the exodus of a portion of the population of Paris.

At the same time, the running costs began to rise. After the Armistice this condition of affairs grew rapidly worse, and by the end of 1920 the financial state of all the six companies was becoming desperate. At this time the managing director of the Compap;nie des Omnibus called a conference of the directors of all the other companies and placed the following -suggestions before • them.— " Either," he said, "we must all file our petitions in bankruptcy separately, or

C28 else we must all combine together and sell our assets to the Department Of the Seine." The directors were not long ]n deciding upon the second solution. In order to take over the whole of the six companies and carry: on the , Conseil Municipale of the Seine had to borrow, 400 million francs in the United States at 8 per cent. This interest is heavy enough, but the fact that it has to be paid in dollars makes it much worse, for at the time that the loan was negotiated the American exchange stood at 12 banes to the dollar, whilst at the present moment it is over 19. This accounts for a large part of the losses of the Societe des Transports en Common de la Region Parisienne.

Now we come to the most arnazihg part of the whole affair. The T.C.R.P., as we have seen, is making an -annual loss of 52 million francs or more. The T.C.R.P., at the same time, cheerfully continues to distribute 9 million francs in " dividends " to its shareholders (who are the shareholders of the old companies) ! Moreover, the shares of 'the old concerns (which are shareholding bodies in the new company) have risen in value considerably. As an example,

the 500 franc shares in the old omnibus company are quoted at the moment on the Paris Bourse somewhere, in the region of 675 francs ! The reason, for this paradox lies in the remarkably favourable terms of the sale contract 'which the old concerns obtained from the Conseil Generale. Under the contract in question, not only was the annual loss of the companies as a whole quietly transferred to the pockets of the taxpayers of Paris, but at the same time each of the old concerns was guaranteed a regular income in proportion to its holding in the new .T.C.R.P.—the said income to continue for the next 30 years or so. Highly satisfactory from the point of view of the directors and shareholders anyway ! The deal would also seem to have pleased' the Conseil Generale, although not, perhaps, the taxpayers, for the council has recently bought up three more companies—the Chemin de far d'Arpajon, the Tramways du Bois de Boulogne, and the Bateaux Parisien.