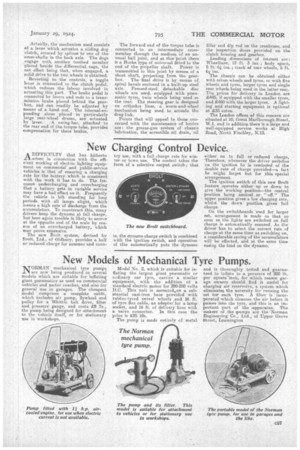 Page 11, 29th January 1924 — New Charging Control Device.
Close
Noticed an error?
If you've noticed an error in this article please click here to report it so we can fix it.

A DIFFICULTY that has hitherto stiarisen in connection with the efficient working of electric lighting equipment on commercial and public-service vehicles) is that of ensuring a charging rate for the battery which is consistent with the work it has to do. The frequent undercharging and overcharging that a battery gets in variable service may have a bad effect on it. Frequently the vehicle is left standing for long periods with all lamps alight, which means a high rate of discharge from the accumulators. To counteract this, many drivers keep the dynamo at full charge, but here again trouble is likely to accrue at the opposite end of the scale by reason of an overcharged battery, which may prove expensive.

The new Breit system, devised by Brolt, Ltd., of Oldbury, provides a half or reduced charge for summer and coun try 'use, with a full charge rate for winter or town use. The control takes the form of a selective output switch; that is, the dynamo charge switch is combined with the ignition switch, and operation of this automatically puts the dynamo either on to -full or reduced charge, Therefore, whenever the driver switches on the ignition he is reminded of the double rate of charge provided—a feet he might forget but for this special arrangement.

The ignition switch of this new Brolt feature operates either-up or down to give the working position—the central position being neutral or " off." The upper position gives a low charging rate, whilst the down position gives full charge.

On the switchboards used for larger set., arrangement is made so that so soon as the lights are switched on full charge is automatically ensured. As the driver has to select the correct rate of charge at the same-time as switching on, a considerable saving of the accumulators will be effected, and at the same time easing the load on the dynamo.