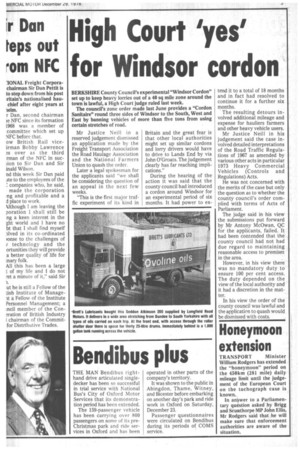 BERKSHIRE County Council's experimental "Windsor Cordon" set up to keep heavy lorries out of a 40 sq mile zone around the town is lawful, a High Court judge ruled last week. The council's zone order made last June provides a "Cordon Sanitaire" round three sides of Windsor to the South, West and East by banning vehicles of more than five tons from using certain stretches of road.

Mr Justice Neill in a reserved judgement dismissed an application made by the Freight Transport Association the Road Haulage Association and the National Farmers Union to quash the order.

Later a legal spokesman for the applicants said "we shall be considering the question of an appeal in the next few weeks.

"This is the first major traffic experiment of its kind in Britain and the great fear is that other local authorities might set up similar cordons and lorry drivers would have to drive to Lands End by via John O'Groats. The judgement ,clearly has far reaching implications," During the hearing of the action it was said that the county council had introduced a cordon around Windsor for an experimental period of six months. It had power to ex tend it to a total of 18 months and in fact had resolved to continue it for a further six months.

The resulting detours involved additional mileage and expense for hauliers farmers and other heavy vehicle users.

Mr Justice Neill in his judgement said the case involved detailed interpretations of the Road Traffic Regulations of 1967 as amended by various other acts in particular 1973 Heavy Commercial Vehicles (Controls and Regulations) Acts.

He was not concerned with the merits of the case but only the question as to whether the county council's order complied with terms of Acts of Parliament.

The judge said in • his view the submissions put forward by Mr Antony McOwan, QC for the applicants, failed. It had been contended that the county council had not had due regard to maintaining reasonable access to premises in the area.

However, in his view there was no mandatory duty to ensure 100 per cent access. The duty depended on the view of the local authority and it had a discretion in the matter.

In his view the order of the county council was lawful and the application to quash would be dismissed with costs.