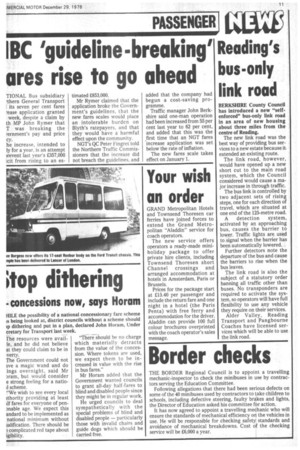 RILE the possibility of a national concessionary fare scheme is being looked at, district councils without a scheme should m dithering and put in a plan, declared John Horam, Under cretary for Transport last week.

The resources were availle, and he did not believe at they could claim to be in iveirty.

The Government could not aye a magic wand and do ings overnight, said Mr Dram, but would consider e strong feeling for a natioLI scheme.

"We wish to see every local ithority providing at least tlf fares for everyone of pen)nable age. We expect this andard to be implemented as national minimum without lalification. There should be ) complicated red tape about igibility. "There should be no charge which materially detracts from the value of the concession. Where tokens are used, we expect them to be increased in value with the rise in bus fares."

Mr Horam added that the Government wanted councils to grant all-day half-fares to blind and disabled people since they might be in regular work.

He urged councils to deal sympathetically with the special problems of blind and disabled people — particularly those with invalid chairs and guide dogs which should be carried free.