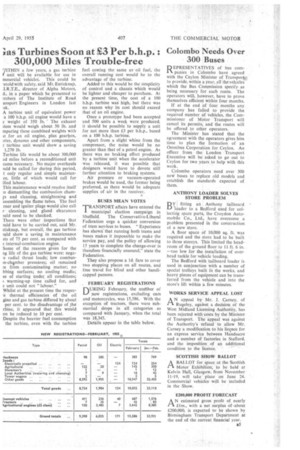 panies in Colombo have agreed with the Ceylon Minister of Transport; to provide, within a year, all the vehicles which the Bus Commission specify as being necessary for each route. The operators will, however, have to prove themselves efficient within four months.

If at the end of four months any company has failed to provide the required number of vehicles, the Commissioner of Motor Transport will cancel its permits, and the routes will be offered to other operators.

The Minister has stated that the agreement with the operators gives him time to plan the formation of an Omnibus Corporation for Ceylon. An officer from the London Transport Executive will be asked to go out to Ceylon for two years to help with this work.

Colombo operators need over 300 new buses to replace old models and establish the standards expected of them.

BY1 fitting an Anthony tailboard loader to a Bedford used for collecting spare parts, the Croydon Automobile Co,, Ltd., have overcome a ptoblem presented in the construction of a new store.

A floor space of 10,000 sq. ft. was required and the store had to be built to three storeys. This limited the headroom of the ground floor to 11 ft. 6 in. —too low for the installation of overhead tackle for vehicle loading.

The Bedford with tailboard loader is used in conjunction with a number of special trolleys built in the works, and heavy pieces of equipment can be transferred from the vehicle and into the store's lift within a few minutes.

A N appeal by Mr. J. Carney, of r"k Rugeley, against a decision of the West Midland Licensing Authority, has been rejected with costs by the Minister of Transport. The appeal was against the Authority's refusal to allow Mr. Carney a modification to his licence for an express service between Handsacre and anumber of factories in Stafford, and the imposition of an additional condition to the licence.

A BALLOT for space at the Scottish 1-1 Motor Exhibition, to be held at Kelvin Half, Glasgow, from November 11-19, will take place on June 24. Commercial vehicles will be included in the Show.

AN estimated gross profit of nearly 11m., with a net surplus of,about £200,000, is expected to be shown by Birmingham Transport Department at the end of the current financial year.