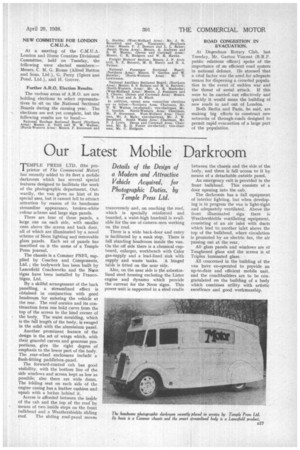 Page 37, 29th April 1938 — NEW COMMITTEE FOR LONDON C.M.U.A.
Close
Noticed an error?
If you've noticed an error in this article please click here to report it so we can fix it.
Keywords : Devon, Cornwall

The various areas of A.R.O. are now holding elections to select representatives to sit on the National Sectional Boards during the ensuing year. The elections are not yet complete. but the following results are to hand:—

At Dagenham Rotary Club, last Tuesday, Mr. Gaston Vincent (B.R.F. public relations officer) spoke of the importance of an efficient road system in national defence. He stressed that a vital factor was the need for adequate means for dispersing a crowded population in the event of sudden war and the threat of aerial attack. If this were to be carried out effectively and quickly it would mean the building of new roads in and out of London.

Both Berlin and Paris, .he said, are making big efforts to construct new networks of through-roads designed to permit rapid evacuation of a large part of the population.