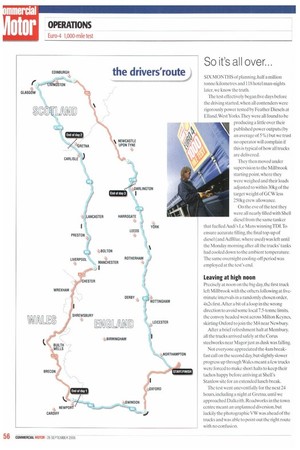 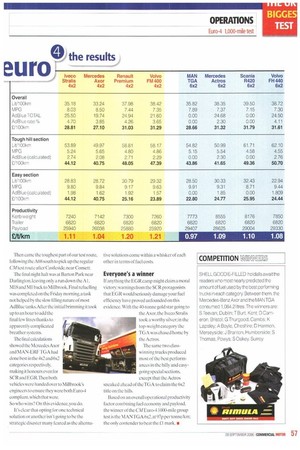 Page 56, 28th September 2006 — So it's all over...
Close
Noticed an error?
If you've noticed an error in this article please click here to report it so we can fix it.

SIX MONTHS of planning, half a million tonne/kilometres and 118 hotel man-nights later, we know the truth.

The test effectively began five days before the driving started, when all contenders were rigorously power tested by Feather Diesels at Elland,West Yorks. They were all found to be producing a little over their published power outputs (by an average of 5%) but we trust no operator will complain if this is typical of how all trucks are delivered.

They then moved under supervision to the Millbrook starting point, where they were weighed and their loads adjusted to within 30kg of the target weight of GCW less 250kg crew allowance.

On the eve of the test they were all nearly filled with Shell diesel from the same tanker that fuelled Audi's Le Mans winning TD11.To ensure accurate filling, the final top-up of diesel (and AdBlue, where used) was left until the Monday morning after all the trucks' tanks had cooled down to the ambient temperature. The same overnight cooling-off period was employed at the test's end.

Precisely at noon on the big day, the first truck left Millbrook with the others following at fiveminute intervals in a randomly chosen order, 4x2s first.After a bit of a loop in the wrong direction to avoid some local 7.5-tonne limits, the convoy headed west across Milton Keynes, skirting Oxford to join the M4 near Newbury.

After a brief refreshment halt at Membury, all the trucks arrived safely at the Corm steelworks near Magorjust as dusk was falling.

Not everyone appreciated the 4am breakfast call on the second day, but slightly slower progress up through Wales meant a few trucks were forced to make short halts to keep their tachos happy before arriving at Shell's Stanlow site for an extended lunch break.

The test went uneventfully for the next 24 hours, including a night at Gretna, until we approached Dalkeith. Roadworks in the town centre meant an unplanned diversion, but luckily the photograph icVW was ahead of the trucks and was able to point out the right route with no confusion. Then came the toughest part of our test route, following the A68 south to pick up the regular CM test route after Castleside, near Consett.

The final night halt was at Barton Park near Darlington, leaving only a run down the Al, M18 and MI back to Millbrook. Final refuelling was completed on the Friday morning, a task not helped by the slow tilling nature of most AdBlue tanks. After the initial brimming it took up to an hour to add the final few litres thanks to apparently complicated breather systems.

The final calculations showed the Mercedes Axor and MAN-ERF TGA had done best in the 4x2 and 6x2 categories respectively, making it honours even for SCR and EGR.Then both. vehicles were handed over to Millbrook's engineers to ensure they were both Euro-4 compliant. which that were.

So who wins? On this evidence, you do. It's clear that opting for one technical solution or another isn't going to be the strategic disaster many feared as the alterna tive solutions come within a whisker of each other in terms of fuel costs.

If anything the EGR camp might claim a moral victory: warnings from the SCR protagonists that EGR would seriously damage your fuel efficiency have proved unfounded on this evidence. With the 40-tonne gold star going to the Axor, the Iveco Stralis took a worthy silver; in the top-weight category the TO A was chased home by the Actros.

The same two classwinning trucks produced most of the best performances in the hilly and easygoing special sections, except that the Actros sneaked ahead of the TGA to claim the 6x2 title on the hills.

Based on an overall operational productivity factor combining fuel economy and payload, the winner of the CM Euro-4 I000-mile group test is the MANTGA 62(2, at 97p per tonne/km; the only contender to beat the Li mark..