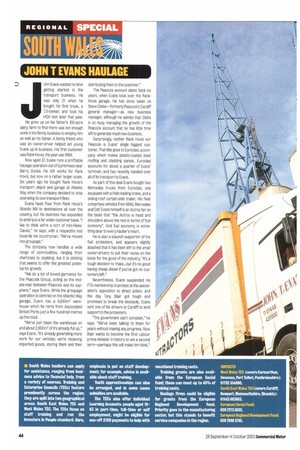 getting started in the transport business. He was only 21 when he bought his first truck, a 7.5-tonner, and took his HGV test later that year.

He grew up on his father's 100-acre dairy farm to find there was not enough work in the family business to employ him as well as his father. A family friend who was an owner-driver helped set young Evans up in business. His first customer was Rank Hovis; the year was 1984.

Now aged 37, Evans runs a profitable haulage operation out of a premises near Barry Docks. He still works for Rank Hovis, but now on a rather larger scale. Six years ago he bought Rank Hovis's transport depot and garage at Atlantic Way when the company decided to stop operating its own transport fleet.

Evans hauls flour from Rank Hovis's Atlantic Mill to destinations all over the country, but his business has expanded to embrace a far wider customer base. "I like to think we're a sort of mini-ReesDavies," he says, with a respectful nod towards his countryman. "We've moved into groupage."

The company now handles a wide range of commodities, ranging from chemicals to cladding, but it is clothing that seems to offer the greatest potential for growth.

"We do a lot of boxed garments for the Peacock Group, acting as the middle-man between Peacock and its suppliers," says Evans. While the groupage operation is centred on the Atlantic Way garage, Evans has a 4,650m2 warehouse which he rents from Associated British Ports just a few hundred metres up the road.

"We've just taken the warehouse an and about 2,800m2 of it's already full up," says Evans. "It's already generating more work for our vehicles; we're receiving imported goods, storing them and then

distributing them to the customer."

The Peacock account dates back six years, when Evans took over the RankHovis garage. He has since taken on Steve Gibbs—formerly Peacock's Cardiff general manager—as new business manager, although he admits that Gibbs is so busy managing the growth of the Peacock account that he has little time left to generate much new business.

Surprisingly, neither Rank Hovis nor Peacock is Evans' single biggest customer. That title gees to Euroclad, a company which makes plastic-coated steel roofing and cladding panels. Euroclad accounts for about a quarter of Evans' turnover, and has recently handed over all of its transport to Evans.

As part of this deal Evans bought two Mercedes trucks from Euroclad, one equipped with a Hiab loading crane, and a sliding-roof curtain-side trailer. His fleet comprises vehicles from MAN, Mercedes and Oaf. Evans himself is an Actros fan on the basis that "the Actros is head and shoulders above the rest in terms of fuel economy". And fuel economy is something dear to every haulier's heart.

He is also a staunch supporter of the Nei protesters, and appears slightly abashed that it has been left to the small owner-drivers to put their necks on the block for the good of the industry "it's a tough decision to make...but it's no good having cheap diesel if you've got no customers left."

Nevertheless, Evans suspended his FTA membership in protest at the association's opposition to direct action, and the day Tony Blair got tough and promised to break the blockade, Evans sent one of his drivers to Cardiff to lend support to the protesters.

"The government can't complain," he says. "We've been talking to them for years without making any progress. Now Blair wants to become the first Labour prime minister in history to win a second term—perhaps this will make him think."