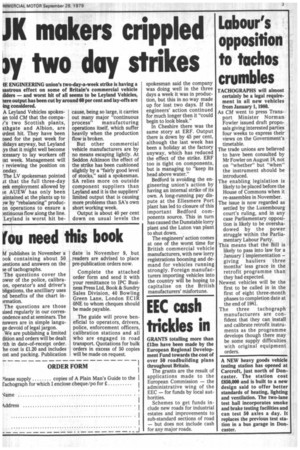 Page 5, 28th September 1979 — Labour's opposition to tachos crumbles
Close
Noticed an error?
If you've noticed an error in this article please click here to report it so we can fix it.
Keywords : Technology, Engineering, Tachometer, Tachograph, Retrofit, Business, Politics

TACHOGRAPHS will almost certainly be a legal requirement in all new vehicles from January 1, 1980.

The trade unions are believed to have been consulted by Mr Fowler on August 18, not on "whether" but "when" the instrument should be introduced.

The enabling legislation is likely to be placed before the House of Commons when it re-assembles in November.

The issue is now regarded as settled by the Luxembourg court's ruling, and in any case Parliamentary opposition is likely to be overshadowed by the power struggle within the Parliamentary Labour Party.

This means that the Bill is likely to pass into law for a January 1 implementation – giving hauliers three months' less grace in the retrofit programme than they had expected.

Newest vehicles will be the first to be called in in the first of eight three-month phases to completion date at the end of 1981.

The three tachograph manufacturers are confident that they can install and calibrate retrofit instruments as the programme develops though there may be some supply difficulties with original equipment orders.