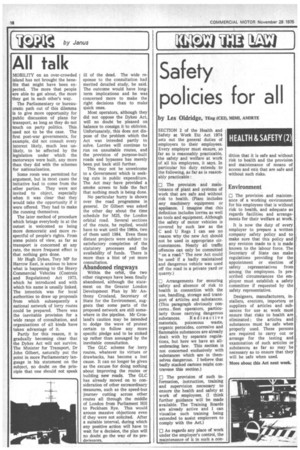 MOBILITY on an over-crowded island has not brought the benefits that might have been expected. The more that people are able to get about, the more they get in each other's way.

The Parliamentary or bureaucratic path out of this dilemma is to give more opportunity for public discussion of plans for transport, as long as they do not touch on party politics. This used not to be the case. The first post-war governments, for example, did not consult every interest likely, much less unlikely, to be affected by the legislation under which the motorways were built, any more than they did with the schemes for nationalisation.

Some room was permitted for argument, but in most cases the initiative had to come from the other parties. They were not invited to object, especially when it was clear that they would take the opportunity if it were offered. They had to make the running themselves.

The later method of procedure Which brings everybody in at the outset is welcomed as being more democratic and more respectful of people's rights. From some points of view, as far as transport is concerned at any rate, the more frequent effect is that nothing gets done.

Mr Hugh Dykes, Tory MP for Harrow East, is anxious to know what is happening to the Heavy Commercial Vehicles (Controls and Regulations) Act 1973, which he introduced and with which his name is usually linked. The intentiOn was for local authorities to draw up proposals from which subsequently a national network of lorry routes could be prepared. There was the inevitable provision for a 'wide range of consultation, and organisations of all kinds have taken advantage of it Partly for this reason, it is gradually becoming clear that the Dykes Act will not survive. 'The Minister for Transport, Dr John Gilbert, naturally put the point in more Parliamentary language in his statement on the subject, no doubt on the principle that one should not speak ill of the dead. The wide response to the consultation had merited detailed study, he said. The outcome would have longterm implications and he was concerned more to make the right decisions than to make quick ones.

Most operators, although they did not oppose the Dykes Act, will no doubt be pleased on balance to consign it to oblivion. Unfortunately, this does not dispose of the problem which the Act was intended partly to solve. Lorries will continue to run on unsuitable routes, and the provision of purpose-built roads and bypasses has merely been put back still further.

This may not be unwelcome to a Government which is seeking cuts in public expenditure. The Act may have provided a smoke screen to hide the fact that nothing much is being done.

No particular hurry is shown over the road programme in general. Dr Gilbert was asked the other day about the time schedule for M25, the London orbital road. Several sections of the route, he replied, would have to wait until the 1980s, two of them until 1984. Even these distant projects were subject to satisfactory completion of the statutory processes and the availability of funds. There is more than a hint of yet more consultation.

Within the orbit, the two other ringways have been finally abandoned, although the statement on the Greater London Development Plan by Mr Anthony Crosland, Secretary of State for the Environment, suggests that some parts of the proposed network are still somewhere in the pipeline. Mr Crosland's caution may be intended to dodge the wave of protest certain to follow any more specific pledge and to be stoked up rather than assuaged by the inevitable consultation.

The GLC scheme for lorry routes, whatever its virtues or drawbacks, has become a lost cause. It can no longer be given as the excuse for doing nothing about improving the routes or building new roads. The GLC has already moved on to consideration of other extraordinary measures, such as the speed-bus journey cutting across other routes all through the middle of London from Parliament Hill to Peckham Rye. This would arouse massive objections even if they were not solicited. After a suitable interval, during which any positive action will have to wait for a decision, the plan will no doubt go the way of its preder'essors.