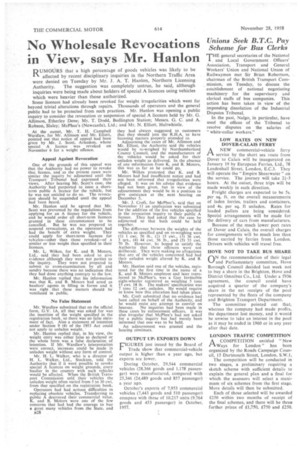 THE general secretaries of the National , and Local Government Officers' Association, Transport and General Workers' Union and National Union of Railwaymen met Sir Brian Robertson, chairman of the British Transport Commission, on Tuesday, to discuss the establishment of national negotiating machineryfor the supervisory and clerical staffs of bus companies. This action has been taken in view of the impending dissolution of the Industrial Disputes Tribunal.

In the past, Nalgo, in particular, have used the offices of the Tribunal to resolve disputes on the salaries of "white-collar workers."

4-1. A NEW commercial-vehicle ferry service by the short sea route from Dover to Calais will be inaugurated on January 19 by European Ferries, Ltd., 78 Leadenhall Street, London, E.C.3. They will operate the "Empire Shearwater " on the service. The journey will take 2-3-3 hours. At the outset, three trips will be made weekly in each direction.

Freight charges are expected to be 5s. per sq. ft. on the overall measurements of laden lorries, trailers and containers, and 4s. per sq.. ft unladen. Rates for loaded pallets are being considered. Special arrangements will be made for the delivery of cars from manufacturers.

Because of the much lower port rates of Dover and Calais, the overall charges for consignments will be much less than those carried by ferries from London. Drivers with vehicles will travel free.

ON the recommendation of their legal and Parliamentary committee, Hove Borough Council decided last week not to buy a share in the Brighton, Hove and District Omnibus Co., Ltd. Under a f936 agreement, the council could have acquired a quarter of the company's share in the net receipts of the pool represented by the fleets of the company and Brighton Transport Department.

The committee pointed out that, whereas the company had made profits, the department lost money, and it would be unwise to take an interest in the pool as it may be ended in 1960 or in any year after that date.

LONDON TRAFFIC COMPETITION A COMPETITION entitled "New rn-Ways for London" has beers organized by the Roads Campaign Council, 15 Dartmouth Street, London, &W.1. The competition will be conducted in two stages, a preliminary requiring a sketch scheme with sufficient details to explain the general plan and a final for which the assessors will select a maximum of six schemes from the first stage. More details will then be submitted.