Denationalization: No Need for Chaos 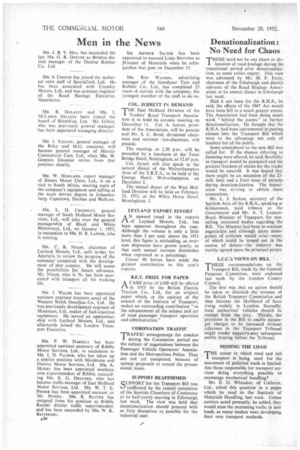 Page 32, 28th November 1952 — Denationalization: No Need for Chaos
Close
Noticed an error?
If you've noticed an error in this article please click here to report it so we can fix it.
Keywords : Road Haulage Association, Bill Of Lading, Transport

THERE need not be any chaos or dis

location of road haulage during the transitional period after denationalize-tion, as some critics expect. This view was advanced by Mr. M. F. Ferry, chairman of the Edinburgh and district sub-area of the Road Haulage Association, at its annual dinner in Edinburgh last week.

Had it not been for the R.H.A., he said, the effects of the 1947 Act would have been felt to a much greater extent. The Association had been doing much work " behind the scenes" to further denationalization. He thought that the R.H.A. had been instrumental in putting clauses into the Transport Bill which were to the advantage not only of hauliers but of the public.

Some amendment-to the new Bill was called for. If the clauses referring to licensing were altered, he said. flexibility in transport would be promoted and the greatest freedom of choice for the trader would he ensured. It was hoped that there might be an extension of the 25mile limit and a freer issue of permits during denationalization. The Association was striving to obtain these concessions.

Mr. L. J. Stokoe. secretary of the Scottish Area of the R.H.A., speaking at Kilmarnock, paid tributes to the Government and Mr. A. T. LennoxBoyd, Minister of Transport, for consulting interested bodies regarding the Bill. The Minister had been in constant negotiation and although many minor points of criticism would arise—many of which could be ironed out in the• course of debate—the industry was mainly agreed upon the principal points.

L.C.C:s VIEWS ON BILL THREE recommendations on the Transport Bill, made by the General Purposes Committee, were endorsed last week by the London County Council.

The first was that no action should' be taken to diminish the revenue of the British Transport Commission and thus increase the likelihood of fares rising unduly in London. Secondly, local authorities' vehicles should be exempt from the levy. Thirdly, the provision in the Bill to enable passenger charges to be increased without reference to the Transport Tribunal might render nugatorysany subsequent public hearing before the Tribunal.

THE extent to which road and rail transport is 'being used for the movement of palletted loads is limited. Are those responsible for transport services doing everything possible to encourage mechanical handling?

Mr. E. G. Whitaker, of Unilever. Ltd., asked this question in a paper which he read to the Institute of Materials Handling, last week. Unless carriers acted promptly, he added, they would miss the increasing traffic in unit loads, as many traders were developing their own transport methods.