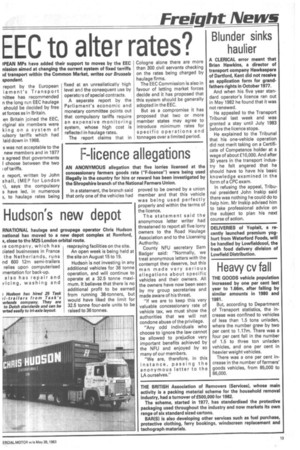 Page 15, 28th May 1983 — Blunder sinks haulier
Close
Noticed an error?
If you've noticed an error in this article please click here to report it so we can fix it.
Keywords : Car Safety, Driver's License, Personal Identification, Traffic Law, Law / Crime

A CLERICAL error meant that Brian Hawkins, a director of transport company Hawkespare of Dartford, Kent did not receive an application form for grandfathers rights in October 1977.

And when his five year standard operator's licence ran out in May 1982 he found that it was not renewed.

He appealed to the Transport Tribunal last week and was granted a stay until July 1983 before the licence stops.

He explained to the Tribunal that his one-vehicle operation did not merit taking on a Certificate of Competence holder at a wage of about £10,000. And after 30 years in the transport industry he felt angered that he should have to have his basic knowledge examined in the form of a CPC exam.

In refusing the appeal, Tribunal president John Inskip said there was nothing he could do to help him. Mr Inskip advised him to take professional advice on the subject to plan his next course of action.