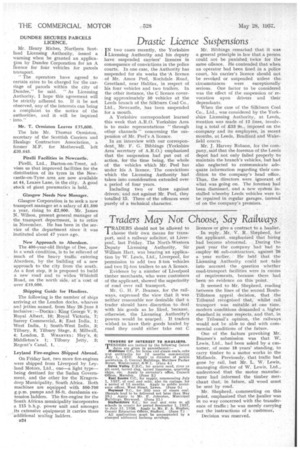 Page 38, 28th May 1937 — Drastic Licence Suspensions
Close
Noticed an error?
If you've noticed an error in this article please click here to report it so we can fix it.
Keywords : Law / Crime, Business / Finance

IN two cases recently, the Yorkshire Licensing Authority and his deputy have suspended carriers' licences in consequence of convictions in the police courts. In one ease, the Authority has suspended for six weeks the 'A licence of Mr. Amos Peel, Rochdale Road, Greettand, near Halifax, in respect of his four vehicles and two trailers. In the other instance, the C licence covering approximately 50 vehicles at the Leeds branch of the Silkburn Coal Co., Ltd., Newcastle, has been suspended for a month.

A Yorkshire correspondent learned this week that A.R.O. Yorkshire Area is to make representations " through other channels " concerning the suspension of Mr. Peel's A licence.

In an interview with our correspondent, Mr. F. G. Bibbings (Yorkshire Area' secretary of A.R.0.) emphasized that the suspension had put out of action, for the time being, the whole of the vehicles which Mr. Peel has under his A licence. The convictions which the Licensing Authority had taken into consideration extended over a period of four years.

Including two or three against drivers; and fint against Mr. Peel, they totalled 15. Three of the offences were purely of a technical character. Mr. Bibbings remarked that it was a general principle in law that a person could not be punished, twice for the same offence. He contended that when an operator had been fined in a police court, his carrier's licence should not be revoked or suspended unless the circumstances were exceptionally serious. One factor to be considered was the effect of the suspension or revocation upon drivers and their dependants.

When the case of the Silkburn Coal Co., Ltd., was considered by the Yorkshire Licensing Authority, at Leeds, mention was made of 12 fines, involving a total of 233 9s., imposed on the company and its employees, in recent months, at Leeds, Bradford and Wakefield courts, Mr: J. Harvey Robson, for the company, said that the foreman of the Leeds depot had 'not only failed properly .to maintain the branch's vehicles, but had also neglected to communicate adequate information regarding their condition to the company's • head office. Thus,, the directors were ignorant of what was going on. The foreman had been dismissed, and a new system installed 'whereby Leeds vehicles were to be repaired in regular garages, instead of on the company's premises.