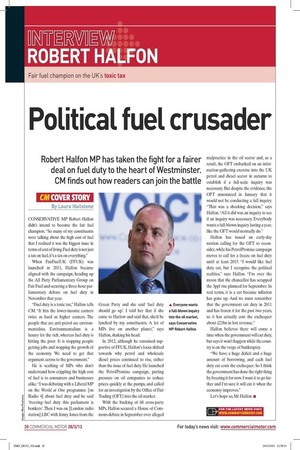 Page 13, 28th March 2013 — Political fuel crusader Robert Hann MP has taken the fight
Close
Noticed an error?
If you've noticed an error in this article please click here to report it so we can fix it.

for a fairer deal on fuel duty to the heart of Westminster. CM finds out how readers can join the battle By Laura Hailstone CONSERVATIVE MP Robert Halfon didn't intend to become the fair fuel champion. "So many of my constituents were talking about the high cost of fuel that I realised it was the biggest issue in terms of cost of living. Fuel duty is not just a tax on fuel, it's a tax on everything."

When FairFuelUK (I,I,UK) was launched in 2011, Halfon became aligned with the campaign, heading up the All Party Parliamentary Group on Fair Fuel and securing a three-hour parliamentary debate on fuel duty in November that year.

"Fuel duty is a toxic tax," Halfon tells CM "It hits the lower-income earners twice as hard as higher earners. The people that are anti-petrol are environmentalists. Environmentalism is a luxury for the rich, whereas fuel duty is hitting the poor. It is stopping people getting jobs and stopping the growth of the economy. We need to get that argument across to the government."

He is scathing of 1MPs who don't understand how crippling the high cost of fuel is to consumers and businesses alike. "I was debating with a Liberal MP on the World at One programme [on Radio 41 about fuel duty and he said 'freezing fuel duty this parliament is bonkers'. Then I was on [London radio station] LB C with Jenny Jones from the Green Party and she said 'fuel duty should go up'. I told her that if she came to Harlow and said that, she'd be lynched by my constituents. A lot of MPs live on another planet," says Halfon, shaking his head.

In 2012, although he remained supportive of 1,I,UK, Halfon's focus shifted towards why petrol and wholesale diesel prices continued to rise, rather than the issue of fuel duty. He launched the PetrolPromise campaign, putting pressure on oil companies to reduce prices quickly at the pumps, and called for an investigation by the Office of Fair Trading (OFT) into the oil market.

With the backing of 68 cross-party MPs, Halfon secured a House of Commons debate in September over alleged malpractice in the oil sector and, as a result, the OFT embarked on an information-gathering exercise into the UK petrol and diesel sector in autumn to establish if a full-scale inquiry was necessary. But despite the evidence, the OFT announced in January that it would not be conducting a full inquiry. "That was a shocking decision," says Halfon. "All it did was an inquiry to see if an inquiry was necessary. Everybody wants a full-blown inquiry lasting a year, like the OFT would normally do."

Halfon has issued an early-day motion calling for the OFT to reconsider, while his PetrolPromise campaign moves to call for a freeze on fuel duty until at least 2015. "I would like fuel duty cut, but I recognise the political realities," says Halfon. "I'm over the moon that the chancellor has scrapped the 3ppl rise planned for September. In real terms, it is a cut because inflation has gone up. And we must remember that the government cut duty in 2011 and has frozen it for the past two years, so it has actually cost the exchequer about £21bn in lost revenue."

Halfon believes there will come a time when the government will cut duty, but says it won't happen while the country is on the verge of bankruptcy.

"We have a huge deficit and a huge amount of borrowing, and each fuel duty cut costs the exchequer. So I think the government has done the right thing by freezing it for now. I want it to go further and I'm sure it will cut it when the economy improves."