The suspension of Channel Tunnel rail-freight services earlier this month 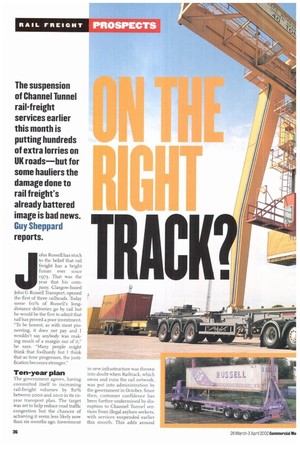 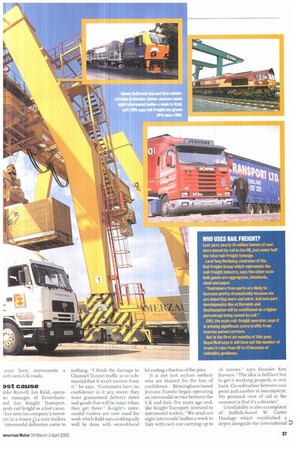 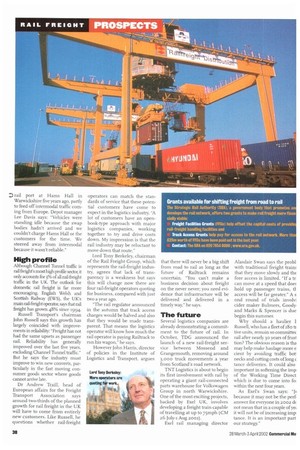 Page 36, 28th March 2002 — The suspension of Channel Tunnel rail-freight services earlier this month
Close
Noticed an error?
If you've noticed an error in this article please click here to report it so we can fix it.
Keywords : Freight Train, Trains, Channel Tunnel, Rail Transport

ohn Russell has stuck to the belief that rail freight has a bright future ever since 1973. That was the year that his cornpany, Glasgow-based John G Russell Transport, opened the first of three railheads. Today some Go% of Russell's longdistance deliveries go by rail but he would be the first to admit that rail has proved a poor investment. To be honest, as with most pioneering, it does not pay and I wouldn't say anybody was making much of a margin out of it," he says. "Many people might think that foolhardy but I think that as time progresses, the justification becomes stronger."

The government agrees, having committed itself to increasing rail-freight volumes by 8o% between 200C) and 2010 in its Doyear transport plan. The target was set to help reduce road traffic congestion but the chances of achieving it seem less likely now than six months ago. Investment in new infrastructure was thrown into doubt when Rai1track, which owns and runs the rail network, was put into administration by the government in October. Since then, customer confidence has been further undermined by disruption to Channel Tunnel services from illegal asylum seekers, with services suspended earlier this month. This adds around

nothing. "I think the damage to Channel Tunnel traffic is so substantial that it won't recover from it," he says. "Customers have no confidence in it any more; they want guaranteed delivery dates and goods that will be intact when they get there." Knight's intermodal trailers are now used for work which Kidd says could equally well be done with second-hand kit costing a fraction oldie price.

It is not just asylum seekers who are blamed for the loss of confidence. Birmingham-based jeavons Eurotir began operating an intermodal service between the UK and Italy five years ago and, like Knight Transport, invested in intermodal trailers. "We send out eight intermodal bodies a week to Italy with each one carrying up to 16 tonnes," says founder Ken Jeavons. "The idea is brilliant but to get it working properly is very hard. Co-ordination between one point and another is non-existent. My personal view of rail at the moment is that it's a disaster."

D rail port at Hams Hall in Warwickshire five years ago, partly to feed off intermodal traffic coming from Europe. Depot manager Lee Davis says: "Vehicles were standing idle because the swap bodies hadn't arrived and we couldn't charge Hams Hall or the customers for the time. We steered away from intermodal because it wasn't reliable."

Although Channel Tunnel traffic is rail freight's most high profile sector, it only accounts for 3% of all rail-freight traffic in the UK. The outlook for domestic rail freight is far more encouraging. English Welsh and Scottish Railway (EWS), the UK's main rail-freight operator, says that rail freight has grown 48% since 1994.

Russell Transport's chairman John Russell says this growth has largely coincided with improvements in reliability: "Freight has not had the same upsets as passenger rail. Reliability has generally improved over the last five years, excluding Channel Tunnel traffic." But he says the industry must improve to win new converts, particularly in the fast moving consumer goods sector where goods cannot arrive late.

Dr Andrew Trail, head of European affairs for the Freight Transport Association says around two-thirds of the planned growth for rail freight in the UK will have to come from entirely new customers. Like Russell, he questions whether rail-freight operators can match the standards of service that these potential customers have come to expect in the logistics industry. "A lot of customers have an openbook-type approach with major logistics companies. working together to try and drive costs down. My impression is that the rail industry may be reluctant to move down that route."

Lord Tony Berkeley, chairman of the Rail Freight Group, which represents the rail-freight industry, agrees that lack of transparency is a weakness but says this will change now there are four rail-freight operators quoting for business, compared with just two a year ago.

"The rail regulator announced in the autumn that track access charges would be halved and also that they would be made transparent. That means the logistics operator will know how much the rail operator is paying Railtrack to run his wagon," he says.

However John Harris, director of policies in the Institute of Logistics and Transport, argues that there will never be a big shift from road to rail as long as the future of Railtrack remains uncertain. "You can't make a business decision about freight on the never never; you need evidence that infrastructure will be delivered and delivered in a timely way," he says.

Several logistics companies are already demonstrating a commitment to the future of rail. In October, TDG announced the launch of a new rail-freight service between Mossend and Grangemouth, removing around 3,000 truck movements a year from Scotland's road network.

TNT Logistics is about to begin its first involvement with rail by operating a giant rail-connected parts warehouse for Volkswagen Group in north Warwickshire. One of the most exciting projects, backed by Exel UK, involves developing a freight train capable of travelling at up to 75mph (CM 26 July-i Aug zoor).

Alasdair Swan says the probl, with traditional freight trains that they move slowly and the fore access is limited. "If a tr. can move at a speed that does hold up passenger trains, tl access will be far greater." A s ond round of trials involvi cider maker Bulmers, Goody, and Marks & Spencer is due begin this summer.

Why should a haulier 1 Russell, who has a fleet of r8o tr five units, remain so committer rail after nearly 30 years of frust tion? The obvious reason is tha may help make haulage more e dent by avoiding traffic bot necks and cutting costs of long tance deliveries. It could also important in softening the imp of the Working Time Direct which is due to come into foi within the next four years.

As Exel's Swan says: "Ji because it may not be the penf answer for everyone in 2002 Ck not mean that in a couple of yei it will not be of increasing imp tance. It is an important part our strategy."