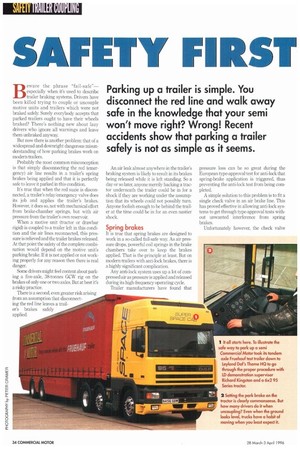 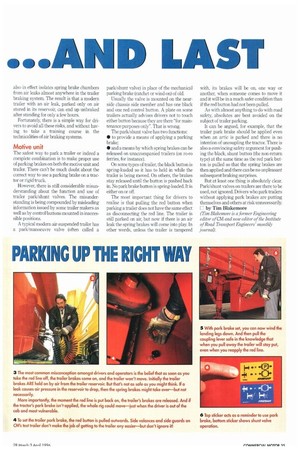 Parking up a trailer is simple. You disconnect the red line and walk away safe in the knowledge that your semi won't move right? Wrong! Recent accidents show that parking a trailer safely is not as simple as it seems.

Beware the phrase "fail-safe"_ especially when it's used to describe trailer braking systems. Drivers have been killed trying to couple or uncouple motive units and trailers which were not braked safely. Surely everybody accepts that parked trailers ought to have their wheels braked? There's nothing new about lazy drivers who ignore all warnings and leave them unbraked anyway.

But now there is another problem: that of a widespread and downright dangerous misunderstanding of how parking brakes work on modern trailers.

Probably the most common misconception is that simply disconnecting the red (emergency) air line results in a trailer's spring brakes being applied and that it is perfectly safe to leave it parked in this condition.

It's true that when the red suzie is disconnected, a trailer's relay/emergency valve does its job and applies the trailer's brakes. However, it does so, not with mechanical effort from brake-chamber springs, but with air pressure from the trailer's own reservoir.

When a motive unit (tractor or drawbar rigid) is coupled to a trailer left in this condition and the air lines reconnected, this pressure is relieved and the trailer brakes released. At that point the safety of the complete combination would depend on the motive unit's parking brake. If it is not applied or not working properly for any reason then there is real danger.

Some drivers might feel content about parking a five-axle, 38-tonnes GCW rig on the brakes of only one or two axles. But at best it's a risky practice.

There is a second, even greater risk arising from an assumption that disconnecting the red line leaves a trailer's brakes safely applied. An air leak almost anywhere in the trailer's braking system is likely to result in its brakes being released while it is left standing. So a day or so latet anyone merrily backing a tractor underneath the trailer could be in for a shock if they are working under the assumption that its wheels could not possibly turn. Anyone foolish enough to be behind the trailer at the time could be in for an even nastier shock.

It is true that spring brakes are designed to work in a so-called fail-safe way. As air pressure drops, powerful coil springs in the brake chambers take over to keep the brakes applied. That is the principle at least. But on modern trailers with anti-lock brakes, there is a highly significant complication.

Any anti-lock system uses up a lot of compressed air as pressure is applied and released during its high-frequency operating cycle.

Trailer manufacturers have found that pressure loss can be so great during the European type-approval test for anti-lock that spring-brake application is triggered, thus preventing the anti-lock test from being completed.

A simple solution to this problem is to fit a single check valve in an air brake line. This has proved effective in allowing anti-lock systems to get through type-approval tests without unwanted interference from spring brakes.

Unfortunately however, the check valve also in effect isolates spring brake chambers from air leaks almost anywhere in the trailer braking system. The result is that a modern trailer with an air leak, parked only on air stored in its reservoir, can end up unbraked after standing for only a few hours.

Fortunately, there is a simple way for drivers to avoid all these risks, and without having to take a training course in the technicalities of air braking systems.

The safest way to park a trailer or indeed a complete combination is to make proper use of parking brakes on both the motive unit and trailer. There can't be much doubt about the correct way to use a parking brake on a tractor or rigid truck.

However, there is still considerable misunderstanding about the function and use of trailer park/shunt valves. The misunderstanding is being compounded by misleading information issued by some trailer makers as well as by control buttons mounted in inaccessible positions.

A typical modern air-suspended trailer has a park/manoeuvre valve (often called a park/shunt valve) in place of the mechanical parking brake (ratchet or wind-on) of old.

Usually the valve is mounted on the nearside chassis side member and has one black and one red control button. A plate on some trailers actually advises drivers not to touch either button because they are there "for maintenance purposes only". That is wrong.

The park/shunt valve has two functions: • to provide a means of applying a parking brake; • and a means by which spring brakes can be released on unaccompanied trailers (on ro-ro ferries, for instance), On some types of trailer, the black button is spring-loaded so it has to held in while the trailer is being moved. On others, the brakes stay released until the button is pushed back in. No park brake button is spring-loaded. It is either on or off.

The most important thing for drivers to realise is that pulling the red button when parking a trailer does not have the same effect as disconnecting the red line. The trailer is still parked on air, but now if there is an air leak the spring brakes will come into play. In other words, unless the trailer is tampered

with, its brakes will be on, one way or another, when someone comes to move it and it will be in a much safer condition than if the red button had not been pulled.

As with almost anything to do with mad safety, absolutes are best avoided on the subject of trailer parking.

It can be argued, for example, that the trailer park brake should be applied even when an artic is parked and there is no intention of uncoupling the tractor. There is also a convincing safety argument for push.

ing the black, shunt button (the non-return type) at the same time as the red park button is pulled so that the spring brakes are then applied and there can be no unpleasant subsequent braking surprises, But at least one thing is absolutely clear. Park/shunt valves on trailers are there to be

used, not ignored. Drivers who park trailers without applying park brakes are putting themselves and others at risk unnecessarily. I by Tim Blakemore

(Tim. Blakemore is a former Engineering editor of CM and now editor of the Institute of Road Transport Engineers' monthly journal).