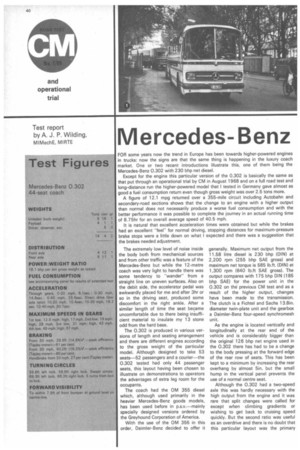 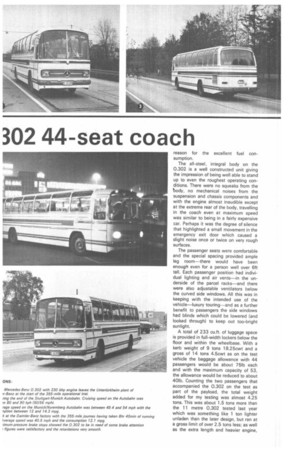 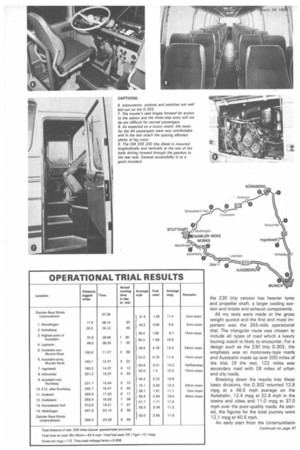 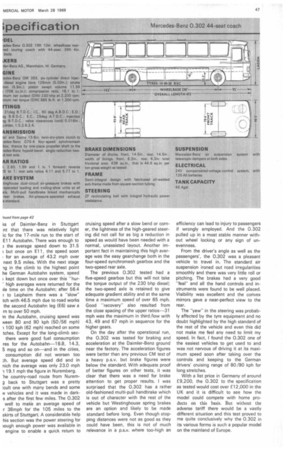 Page 42, 28th March 1969 — Mercedes-Benz 302 44-seat coach
Close
Noticed an error?
If you've noticed an error in this article please click here to report it so we can fix it.

FOR some years now the trend in Europe has been towards higher-powered engines in trucks: now the signs are that the same thing is happening in the luxury coach market. One or two recent introductions illustrate this, one of them being the Mercedes-Benz 0.302 with 230 bhp net diesel.

Except for the engine this particular version of the 0.302 is basically the same as that put through an operational trial by CM in August 1968 and on a full road test and long-distance run the higher-powered model that I tested in Germany gave almost as good a fuel consumption return even though gross weight was over 2.5 tons more.

A figure of 12.1 mpg returned over a 355-mile circuit including Autobahn and secondary-road sections shows that the change to an engine with a higher output than normal does not necessarily produce a worse fuel consumption and with the better performance it was possible to complete the journey in an actual running time of 8.75hr for an overall average speed of 40.5 mph.

It is natural that excellent acceleration times were obtained but while the brakes had an excellent "feel" for normal driving, stopping distances for maximum-pressure brake stops were a little down on what I expected and there was a suggestion that the brakes needed adjustment.

The extremely low level of noise inside the body both from mechanical sources and from other traffic was a feature of the Mercedes-Benz but while the 12-metre coach was very light to handle there was some tendency to "wander" from a straight line on uneven surfaces. Also on the debit side, the accelerator pedal was awkwardly placed for me and after 3hr or so in the driving seat, produced some discomfort in the right ankle. After a similar length of time the seat became uncomfortable due to there being insufficient material to insulate my 13 stone odd from the hard base.

The 0.302 is produced in various versions of length and seating arrangement and there are different engines according to the gross weight of the particular model. Although designed to take 53 seats-52 passengers and a courier—the 0.302 tested had only 44 passenger seats, this layout having been chosen to illustrate on demonstrations to operators the advantages of extra leg room for the occupants.

The coach had the OM 355 diesel which, although used primarily in the heavier Mercedes-Benz goods models, has been used before in p.s.v.---mainly specially designed versions ordered by the Greyhound Corporation of America.

As the engine is located vertically and longitudinally at the rear end of the vehicle and is considerably bigger than the original 126 bhp net engine used in the 0.302 there has had to be a change to the body pressing at the forward edge of the rear row of seats. This has been kept to a minimum by increasing the rear overhang by almost 5in, but the small hump in the vertical panel prevents the use of a normal centre seat. .

Although the 0.302 had a two-speed axle this was hardly necessary with the high output from the engine and it was rare that split changes were called for except when climbing gradients or wishing to get back to cruising speed quickly. But the second ratio was useful as an overdrive and there is no doubt that this particular layout was the primary reason for the excellent fuel consumption.

The all-steel, integral body on the 0.302 is a well constructed unit giving the impression of being well able to stand up to even the roughest operating conditions. There were no squeaks from the body, no mechanical noises from the suspension and chassis components and with the engine almost inaudible except at the extreme rear of the body, travelling in the coach even at maximum speed was similar to being in a fairly expensive car. Perhaps it was the degree of silence that highlighted a small movement in the emergency exit door which caused a slight noise once or twice on very rough surfaces.

The passenger seats were comfortable and the special spacing provided ample leg room—there would have been enough even for a person well over 6ft tall. Each passenger position had individual lighting and air vents—in the underside of the parcel racks—and there were also adjustable ventilators below the curved side windows. All this was in keeping with the intended use of the vehicle—luxury touring—and as a further benefit to passengers the side windows had blinds which could be lowered (and looked through) to keep out too-bright sunlight.

A total of 233 cu.ft. of luggage space is provided in full-width lockers below the floor and within the wheelbase. With a kerb weight of 9 tons 18.25cwt and a gross of 14 tons 4.5cwt as on the test vehicle the baggage allowance with 44 passengers would be about 75Ib each and with the maximum capacity of 53, the allowance would be reduced to about 40Ib. Counting the two passengers that accompanied the 0.302 on the test as part of the payload, the total weight added for my testing was almost 4.25 tons. This was about 1.5 tons more than the 11 metre 0.302 tested last year which was something like 1 ton lighter unladen than the later design, but ran at a gross limit of over 2,5 tons less; as well as the extra length and heavier engine, the 230 bhp version has heavier tyres and propeller shaft, a larger cooling system and intake and exhaust components.

All my tests were made at the gross weight quoted and the first and most important was the 355-mile operational trial. The triangular route was chosen to include all types of road which a luxury touring coach is likely to encounter. For a design such as the 230 bhp 0.302, the emphasis was on motorway-type roads and Autobahn made up over 200 miles of the trial. Of the rest, 122 miles was secondary road with 28 miles of urban and city roads.

An early start from the Unterturkheim

ks of Daimler-Benz in Stuttgart nt that there was relatively light ic for the 1 7-mile run to the start of El 1 Autobahn. There was enough to ) the average speed down to 31.5 t but once on Eli, the speed soon 1 for an average of 43.2 mph over next 9.5 miles. With the next stage lg in the climb to the highest point he German Autobahn system, speed ; kept down but once over this "hur' high averages were returned for the ile time on the Autobahn; after 56.4

In the Autobahn, cruising speed was rveen 80 and 90 kph (50/56 mph) ) 100 kph (62 mph) reached on some tches. Except for the long-climb secthere were good fuel consumption res for the Autobahn-16.8, 14.3, 5 mpg and so on—and in the cities, consumption did not worsen too 2h. But average speed did and in nich the average was only 23.0 mph 119.1 mph the figure in Nuremberg. 'he country-road route from Nuremg back to Stuttgart was a pretty icult one with many bends and some rir vehicles and it was made in darks after the first few miles. The 0,302 well to make an average speed of r 38mph for the 105 miles to the skirts of Stuttgart. A considerable help his section was the power steering for lough enough power was available in engine to enable a quick return to

cruising speed after a slow bend or corner, the lightness of the high-geared steering did not call for as big a reduction in speed as would have been needed with a normal, unassisted layout. Another important fact in maintaining this high average was the easy gearchange both in the four-speed synchromesh gearbox and the two-speed rear axle.

The previous 0.302 tested had a five-speed gearbox but this will not take the torque output of the 230 bhp diesel; the two-speed axle is retained to give adequate gradient ability and at the same time a maximum speed of over 65 mph. Good "recovery' also resulted from the close spacing of the upper ratios-31 mph was the maximum in third/low with 43, 49 and 67 mph in sequence for the higher gears.

On the day after the operational run, the 0.302 was tested for braking and acceleration at the Daimler-Benz ground near the factory. The acceleration figures were better than any previous CM test of a heavy p.s.v. but brake figures were below the standard. With adequate proof of better figures on other tests, it was clear that there was a need for brake attention to get proper results. I was surprised that the 0.302 has a rather old-fashioned multi-pull handbrake which is out of character with the rest of the vehicle but Westinghouse spring brakes are an option and likely to be made standard before long. Even though stopping distances were not as good as they could have been, this is not of much relevance in a p.s.v. where too-high an efficiency can lead to injury to passengers if wrongly employed. And the 0.302 pulled up in a most stable manner without wheel locking or any sign of unevenness.

From the driver's angle as well as the passengers', the 0.302 was a pleasant vehicle to travel in. The standard air suspension ironed out road irregularities smoothly and there was very little roll or pitching. The brakes had a very good "feel" and all the hand controls and instruments were found to be well placed. Visibility was excellent and the convex mirrors gave a near-perfect view to the rear.

The "yaw" in the steering was probably affected by the tyre equipment and no doubt highlighted by the high standard of the rest of the vehicle and even this did not make me feel any need to limit my speed. In fact, I found the 0.302 one of the easiest vehicles to get used to and was not nervous of driving it at its maximum speed soon after taking over the controls and keeping to the German drivers' cruising range of 80/90 kph for long stretches.

With a list price in Germany of around £9,200, the 0.302 to the specification as tested would cost over £12,000 in the UK and it is difficult to see how the model could compete with home products on this basis. But without the adverse tariff there would be a vastly different situation and this test proved to me quite conclusively why the 0.302 in its various forms is such a popular model on the mainland of Europe.