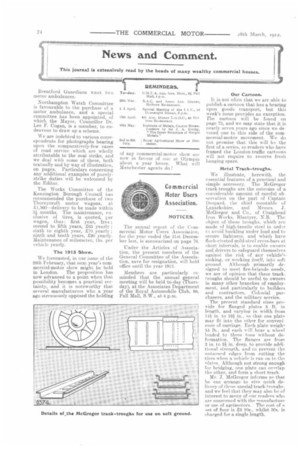 Northampton Watch Committee is favourable to the purchase of a motor ambulance, and a special committee has been appointed, of which the Mayor, Councillor Dr. Lee F. Cogan, is a member, to endeavour to draw up a scheme.

We are indebted to various correspondents for photographs bearing upon the comparatively-few cases of road service which are wholly attributable to the coal strike, and we deal with some of these, both textually and by way of illustration, on pages. Particulars concerning any additional examples of purelystrike duties will be welcomed by the Editor.

The Works Committee of the Kensington Borough Council has recommended the purchase of two Thornycroft motor wagons, at 1:1,360—delivery to be made within 34 months. The maintenance, exclusive of tires, is quoted, per wagon, thus: first year, free ; second to fifth years, £65 yearly sixth to eighth year, £70 yearly ; ninth and tenth years, £90 yearly. Maintenance of milometer, les. per vehicle yearly.

We forecasted, in our issue of the 29th February, that next year's commercial-motor show might be held in London. The proposition has now advanced to a point when that possibility becomes a practical certainty, .and it is noteworthy that several manufacturers who a year ago strenuously opposed the holding of any commercial-motor show are now in favour of one at Olympia about a year hence. What will Manchester agents do ?