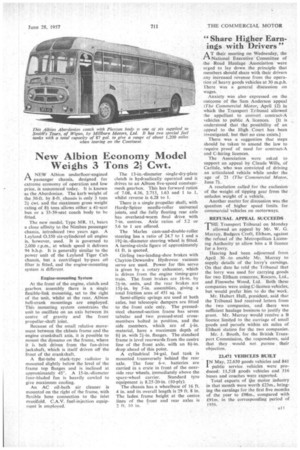 AT their meeting on Wednesday, the National Executive Committee of the Road Haulage Association were urged to lay down the principle that members should share with their drivers any increased revenue from the operation of heavy goods vehicles at 30 m.p.h. There was a general discussion on wages.

Anxiety was also expressed on the outcome of the Sam Anderson appeal The Commercial Motor, April 12) in which the Transport Tribunal allowed the appellant to convert contract-A vehicles to public A licences. [It is understood that the possibility of an appeal to the High Court has been investigated, but that no case exists.] There was a suggestion that steps should be taken to amend the law to require proof of need for contract-A and C-hiring licences.

The Association were asked to support an appeal by Claude Wills, of Carlisle, who was convicted of driving an articulated vehicle while under the age of 21 (The Commercial Motor, June 7)..

A resolution called for the exclusion of the weight of tipping gear from the unladen weight of a vehicle.

Another matter for discussion was the question of higher speed limits for commercial vehicles on motorways.

THE Transport Tribunal on Monday allowed an appeal by Mr. W. G. Murray, Badgers Croft, Eltham, against the refusal of the Metropolitan Licensing Authority to allow him a B licence for a lorry.

Hearing had been adjourned from April 30 -to enable Mr. Murray to supply details of the lorry's earnings. On that date he told the Tribunal that the lorry was used for carrying goods for two Eltham concerns, Rocaro. Ltd., and Finswebe Wood, Ltd. Both these companies were using C-licence vehicles, but would prefer him to do the work.

Mr. Hubert Hull, president, said that the Tribunal had received letters from the two companies, and there was sufficient haulage business to justify the grant. Mr. Murray would receive a 11 licence limited to the carriage of small goods and parcels within six miles of Elthani station for the two companies.

Mr. J. Booth, for the British Transport Commission, the respondents, said that they would not pursue their objection.

23,471 VEHICLES BUILT IN May, 22,630 goods vehicles and 841 I public service vehicles were produced: 11,518 goods vehicles and 516 buses and coaches were exported. Total exports of the motor industry in that month were worth f23m., bringing the earnings for the first five months of the year to £98m., compared with £91m. in the corresponding period of 1956.