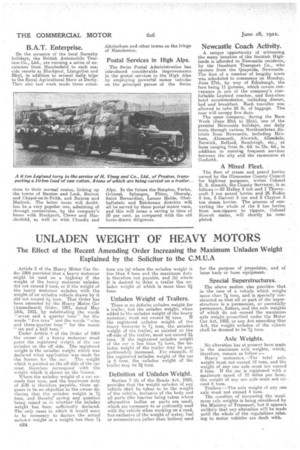 Page 8, 28th June 1921 — UNLADEN WEIGHT OF HEAVY MOTORS
Close
Noticed an error?
If you've noticed an error in this article please click here to report it so we can fix it.

The Effect of the Recent Amending Order Increasing the Maximum Unladen Weight Explained by the Solicitor to the C.M.U.A

Section 7 (6) of the Roads Act, 1920, provides that the weight unladen of any vehicle shall be taken to be the weight of the vehicle, inclusive of the body and all parts (the heavier being taken where alternative bodies or parts are used), which are necessary to or ordinarily used with the vehicle when working on a road, but exclusive of the weight of water, fuel or accumulators (other than boilers) used

for the purpose of propulsion, and of loose tools or loose equipment.

The above section also provides that in the case of a vehicle. which weighs more than tons, and is ipecially constructed so that all or part of the superstructure is a. permanent, ot essentially permanent, fixture, and the axle weights of which do not exceed the maximum axle weight prescribed under the Motor Car Act, 1903, or any Act amending that Act, the weight unladen of the vehicle Shall be deemed to be 7i tons.

No alteration has at present been made in the maximum axle weights, which, therefore, remain as follow :—

Trailers :—The axle weight of any one axle must not exceed 4 tons. • The question of increasing the maximum axle weights is being considered by the Ministry of Transport, but it appears unlikely that any alteration will be made until the whole of the regulations relating to motor vehicles are dealt with.