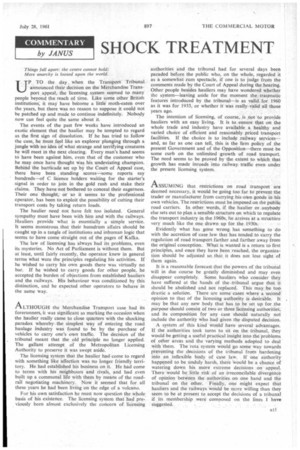 Page 49, 28th July 1961 — SHOCK TREATMENT
Close
Noticed an error?
If you've noticed an error in this article please click here to report it so we can fix it.

UP TO the day., when the Transport Tribunal announced their decision on the Merchandise Transport appeal, the licensing system seemed to many people beyond the reach of time. Like some other British institutions; it may have beeome a little moth-eaten over the years, but there was no reason to suppose it could not be patched up and made to continue indefinitely. Nobody now can feel quite the same about it.

The events of the past few weeks have introduced an exotic element that the haulier may be tempted to regard as the first sign of dissolution. If he has tried to follow the case, he must feel like an explorer plunging through a jungle with no idea of what strange and terrifying creatures he will meet in the next clearing. Every man's hand seems to have been against him, even that of the customer who he may once have thought was his undeviating champion.

Behind the barricade set up by the Court of Appeal case, there have been standing scores—some reports say hundreds—of C licence holders waiting for the starter's signal in order to join in the gold rush and stake their claims. They have not bothered to conceal their eagerness. Their one thought, or so it seems to the professional operator, has been to exploit the possibility of cutting their transport costs by taking return loads.

The haulier need not have felt too isolated. General sympathy must have been with him and with the railways.

Hauliers provide what is essentially a simple service. it seems monstrous that their humdrum affairs should be caught up in a tangle of institutions and inhuman logic that seems to have come straight out of the pages of Kafka.

The law of licensing has always had its problems, even its mysteries. No Act of Parliament is without them. But at least, until fairly recently, the operator knew in general terms what were the principles regulating his activities. If he wished to carry his own goods there was virtually no bar. If he wished to carry goods for other people, he accepted the burden of objections from established hauliers and the railways. His behaviour was conditioned by this distinction, and he expected other operators to behave in the same way.

ALTHOUGH the Merchandise Transport case had its forerunners, it was significant as marking the occasion when the haulier really came to close quarters with the shocking paradox whereby, the simplest way of entering the road haulage industry was found to be by the purchase of vehicles to carry one's own traffic. The decision of the tribunal meant that the old principle no longer applied. The gallant attempt of the Metropolitan Licensing Authority to preserve it was swept aside.

The licensing system that the haulier had come to regard with something like affection was no longer friendly territory. He had established his business on it. He had come to terms with his neighbours and rivals, and had even built up a communal life with them by means of the roadrail negotiating machinery. Now it seemed that for all these years he had been living on the edge of a volcano.

For his own satisfaction he must now question the whole basis of his existence. The licensing system that had previously been almost exclusively the concern of licensing authorities and the tribunal had for several days been paraded before the public who, on the whole, regarded it as a somewhat rum spectacle, if one is to judge from the comments made by the Court of Appeal during the hearing. Other people besides hauliers may have wondered whether the system—leaving aside for the moment the traumatic features introduced by the tribunal—is as valid for 1960 as it was for 1933, or whether it was really valid all those years ago.

The intention of licensing, of course, is not to provide hauliers with an easy living. It is to ensure that on the whole trade and industry have available a healthy and varied choice of efficient and reasonably priced transport facilities. If the choice is to include .railway services— and, as far as one can tell, this is the firm policy of _the present Government and of the Opposition—there must be some curb on the unlimited growth of road transport. The need seems to be proved by the extent to which. that growth has made inroads into railway traffic even under the present licensing system.

ASSUMING that restrictions on road transport are deemed necessary, it would be going too, far to prevent the trader or manufacturer from carrying his own goods in his own vehicles. The restrictions must be imposed on the public road carriers. In other words, if the haulier or anybody else sets out to plan a sensible structure on which to regulate the transport industry in the 1960s, he arrives at a structnre very much like the one drawn up for the 1930s.

Evidently what has gone wrong has something to do with the accretion of case law that has tended to carry the regulation of road transport farther and farther away from the original conception. What is wanted is a return to first principles, and once they have been reached, the organization should be adjusted so that it does not lose sight of them again.

It is a reasonable forecast that the powers of the tribunal will in due course be greatly diminished and may even disappear completely. Some hauliers who consider they have suffered at the hands of the -tribunal argue that it should be abolished and not replaced. This may be too drastic a solution. There are some cases where a second opinion to that of the licensing authority is desirable. It may be that any new body that has to be set up for the purpose should consist of two or three licensing authorities, and its composition for any case should naturally not include the authority who had given the disputed decision.

A system of this kind would have several advantages. If the authorities took turns to sit on the tribunal, they would be getting a useful practical insight into the problems of other areas and the varying methods adopted to deal with them. The rota system would go some way towards preventing the decisions of the tribunal. from hardening into an inflexible body of case law. If one authority happened to be unduly harsh, there Would be a chance of watering down his more extreme decisions on appeal. There would be little risk of an irreconcilable divergence of opinion between the authorities on one hand and the tribunal on the other. Finally. one might expect that hauliers and the railways would be more willing than they seem to be at present to accept the decisions of a tribunal if its membership were composed on the lines I have suggested.