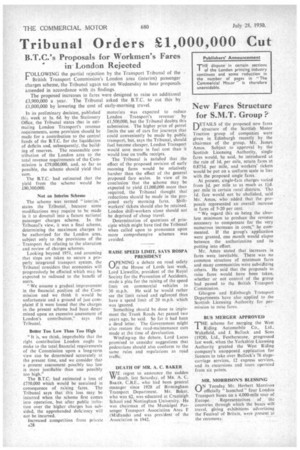 FOLLOWING the partial rejection by the Transport Tribunal of the British Transport Commission's London area (interim) passenger charges scheme, the Tribunal again sat on Wednesday to hear proposals amended in accordance with its findings. The proposed increases in fares were designed to raise an additional 0,900,000 a year. The Tribunal asked the B.T.C. to cut this by £1,000,000 by lowering the cost of early-morning travel.

In its preliminary decision, published this week at Is. 6d. by the Stationery Office, the Tribunal states that in estimating London Transport's revenue requirements, some provision should be made for a contribution to the central. funds of the B.T.C. for the liquidation of deficits and, subsequently', the build ing of reserves. The reasonable contribution of the London area to the total revenue requirements of the Commission is £79,000,000. and, so far as possible, the scheme should yield that sum.

Not an Interim Scheme

. The scheme was termed "interim," states the Tribunal, because some modifications may require to be made in it to dovetail into a future national passenger charges scheme. In the Tribunal's view, it was a final scheme, determining the maximum charges to be authorized for the London area, subject only to the provisions of the Transport Act relating to the alteration and review of charges schemes.

Looking beyond 1951. and assuming that steps are taken to secure a properly integrated transport system, the Tribunal considers that economies will progressively be effected which may be expected to redound to the benefit of users.

"We assume a gradual improvement in the financial position of the Commission and we think it would be unfortunate and a ground of just complaint if it were tound that the charges in the present scheme had been determined upon an excessive assessment of London's contribution," says the Tribunal.

Better Too Low Than To High

"It is, we think, improbable that the right contribution London ought to make to the total financial. requirements of the Commission upon a long-term view can be determined accurately at the present time, and we consider that a present assessment possibly too low is more justifiable than one possibly too high."

The B.T.C. had estimated a loss of £750,000 which would be sustained in consequence of raising fares. The Tribunal says that this loss may be incurred when the scheme first comes into operation, but after public irritation over the higher charges has subsided, the apprehended deficiency will not be incurred.

Increased competition from private A28 motorists was expected to reduce London Transport's revenue by £1,500,000, but the Tribunal doubts this submission. The higher price of petrol limits the use of cars for journeys that could conveniently be made by public transport, but, says the Tribunal, should fuel become cheaper, London Transport would save more in fuel cost than it would lose on traffic receipts.

The Tribunal is satisfied that the effect of the proposed revision of early morning fares would be relatively harsher than the effect of the general proposed fare scales. In view of its conclusion that the scheme may be expected to yield £1,000,000 more than required, the Tribunal thought that reductions should be made in the proposed early morning fares. Shiftworkers' tickets should also be retained. London shift-workers alone should not be deprived of cheap travel.

Determination of questions of principle which might have tied the Tribunal when called upon to pronounce upon more comprehensive schemes was avoided.

OPEN1NG a debate on road safety in the House of Lords last week, Lord Llewellin, president of the Royal Society for the Prevention of Accidents, made a plea for the raising of the speed limit on commercial vehicles to

30 m.p.h. He said he would rather see the limit raised and enforced than have a speed limit of 20 m.p.h. which was ignored.

Something should be done to implement the Trunk Roads Act passed two years ago, he said. So far it had been a dead letter. The Government might also restore the road-maintenance cuts made at the time of devaluation.

Winding-up the debate, Lord Lucas promised to consider suggestions that pedestrians should also conform to the same rules and regulations as road traffic.

WE regret to announce the sudden VV death, last Saturday, of MR. A. C. BAKER. C.B.E. who had been general manager since 1928 of Birmingham Transport Department. Mr. Baker, who was 62. was educated at Cranleigh School and Nottingham University. He was chairman of the Municipal Passenger Transport Association Area F (Midlands) and was president of the Association in 1942.