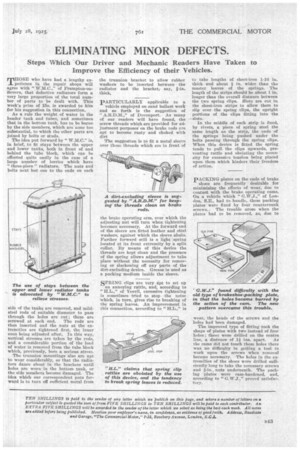 Page 27, 28th July 1925 — ELIMINATING MINOR DEFECTS.
Close
Noticed an error?
If you've noticed an error in this article please click here to report it so we can fix it.

Steps Which Our Driver and Mechanic Readers Have Taken to Improve the Efficiency of their Vehicles.

MHOSE who have had a lengthy ex perience in the repair shops will agree with " W.M.C.," of lframpton-onSevern, that defective radiators form a very large proportion of the total number of parts to be dealt with. This week's prize of 15s. is awarded to him for his suggestion in this connection.

As a rule the weight of water in the header tank and tubes, and sometimes that in the bottom tank, has to be borne by the side members, which are none too substantial, to which the other parts are joined by bolts or studs.

The idea put forward by " W.M.C." is, in brief, to fit stays between the upper and lower tanks, both in front of arid behind the tube block, which can be effected quite easily in the case of a large number of lorries which have " three-piece" radiators. The nuts and bolts next but one to the ends on each

side of the tanks are removed, and mildsteel rods of suitable diameter to pass through the holes are cut; these are screwed at each end. The rods are then inserted and the nuts at the extremities are tightened first, the inner ones being adjusted after. In this way, vertical stresses are taken by the rods, and a considerable portion of the load of water is removed from the tube block which, previously, bore a serious stress.

The trunniou mountings also are apt to wear considerably, so that the radiators dance about in the brackets until holes are worn in the bottom tank, or the side members become damaged. The idea which our correspondent puts forward is to turn off sufficient metal from

the trunnion bracket to allow rubber washers to be inserted between the radiator and the bracketa say, On. thick,

vehicle employed on sand ballast work and so forth is the suggestion of " A.R.D.hI.," of Davenport. As many of our readers will have found, the screw threads which are provided for adjustment purposes on the brake iods are apt to become rusty and choked with dirt The suggestion is to fit a metal sleeve over those threads which are in front of the brake operating arm, over which the adjusting nut will turn when tightening becomes necessary. At the forward end of the sleeve are fitted leather and steel washers, against which the sleeve abuts. Parther forward still is a light spring located at its front extremity by a split collar. 33y means of this device the threads are kept clean and the presence of the spring allows adjustment to take place without the necessity for removing or slackening off any parts of the dirt-excluding device. Grease is used as a packing medium inside the sleeve.

SPRING clips are very Eipt to set up

an annoying rattle, and, according to "ILL.," of Yeovil, excessive tightening is sometimes tried to stop the noise which, in turn, gives rise to breaking of the spring leaves. An improvement in this connection, according to "ELL„" is

thick and about in. wider than the master leaves of the springs. The length of the strips should be about 1 in. longer than the overall distance between the two spring clips. Slots are cut in the sheet-iron strips to allow them to slip over the spring clips, the upright portions of the clips fitting into the -slots.

In the middle of each strip is Axed, by rivets, a piece of spring steel the same length as the strip, the ends of the springs being pushed under the bolts passing through the spring, clips. When this device is fitted the spring tends to pull the clips upwards, preventing rattle and obviating the necessity for excessive tension being placed upon them Which hinders their freedom of action.

RACKING plates on the ends of brake shoes are frequently desirable for minimizing the effects of wear, due to contact with the brake operating cams.

On a vehicle which " of London, SE., had to handle, these packing plates were fixed by four countersunk screws.. The trouble arose when the Plates bad to be removed, as, due to

wear, the heads of the screws and the boles had been damaged.

The improved type of fitting took the shape of plates with to instead of tom holes; these were drilled on the centre

line, a distance of 14,ins. apart. As the cams did not touch these holes there was no difficulty in getting a tool to work upon the screws when removal became necessary. The holes in the extremities of the shoes were drilled sufficiently long to take the necessary screws and nuts underneath. The packing plates were case-hardened, and, according to G.W.J.," proved satisfali-. tory.