THE PROBLEM OF COMPULSORY INSURANCE. 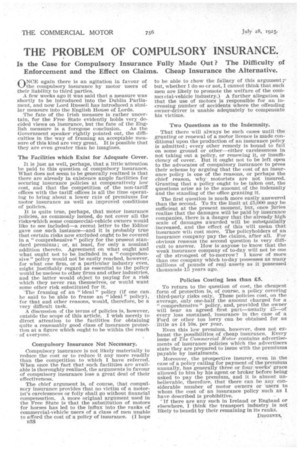 Page 22, 28th July 1925 — THE PROBLEM OF COMPULSORY INSURANCE.
Close
Noticed an error?
If you've noticed an error in this article please click here to report it so we can fix it.
Keywords : Types Of Insurance, Insurance, Finance, Expatriate Insurance, Permanent Life Insurance, Social Issues

Is the Case for Compulsory Insurance Fully Made Out ? The Difficulty of Enforcement and the Effect on Claims. Cheap Insurance the Alternative.

ONCE again there is an agitation in favour of the compulsory insurance by motor users of their liability to third parties.

A few weeks ago it was said that a measure was shortly to be introduced into the Dublin Parliament, and now Lord Russell has introduced a similar measure into the English House of Lords.

The fate of the Irish measure is rather uncertain, for the Free State evidently holds very decided views on insurance, but the fate of the English measure is a foregone conclusion. As the Government speaker rightly pointed out, the difficulties in the way of framing an acceptable measure of this kind are very great. It is possible that they are even greater than he imagines.

The Facilities which Exist for Adequate Cover.

It is just as well, perhaps, that a little attention be paid to this question of compulsory insurance. What does not seem to be generally realized is that there are already in existence ample facilities for securing insurance policies at comparatively low cost, and that the competition of the non-tariff offices with the tariff offices is all the time operating to bring about a lower rate of premiums for motor insurance as well as improved conditions of policies.

It is quite true, perhaps, that motor insurance policies, as commonly issued, do not cover all the risksIwhich some commercial-vehicle owners would like to see included—a recent letter to the Editor gave one such instance—and it is probably true that certain risks now excluded ought to be covered in a " comprehensive " policy for the present standard premium ; or, at least, for only a nominal addition thereto. Agreement on what ought and what ought not to be included in a " comprehensive " policy would not be easily reached, however, for what one firm, or a particular industry even, might justifiably regard as essential to the policy would be useless to other firms and other industries, and the latter would object to paying for a risk which they never ran themselves, or would want some other risk substituted for it.

The framing of an " Ideal " policy (if one can be said to be able to frame an " ideal " policy), for that and other reasons, would, therefore, be a very difficult task.

A discussion of the terms of policies is, however, outside the scope of this article. I wish merely to direct attention to the facilities for obtaining quite a reasonably good class of insurance protection at a figure which ought to be within the reach of everyone.

Compulsory insurance is not likely materially to reduce the cost or to reduce it any more readily than the competition to which I have referred. When once the fact that such facilities are available is thoroughly realized, the arguments in favour of compulsory insurance lose a great deal of their effectiveness.

The chief argument is, of course, that compulsory insurance provides that no victim of a motorist's carelessness or folly shall go without financial compensation. A more original argument used in the Free State is that the substitution of motors for horses has led to the influx into the ranks of commercial-vehicle users of a class of men unable to afford the cost of a policy of insurance. (I hope n38

to be able to show the fallacy of this argument ;but, whether I do so or not, I cannot think that such men are likely to promote the welfare of the commercial-vehicle industry.) A further allegation is that the use of motors is responsible for an increasing number of accidents where the offending owner-driver is unable adequately to compensate his victims.

Two Questions as to the Indemnity.

That there will always be such casesuntil the ,granting or renewal of a motor licence is made conditional upon the production of an insurance policy is admitted ; every other remedy is bound to fail on some ground or other—either carelessness in not taking out a policy, or renewing it, or insufficiency of cover. But it ought not to be left open to the advocates of compulsory insurance to press their scheme by arguing that the cost of an insurance policy is one of the reasons, or perhaps the chief reason, why motorists are not insured. Granting that a policy ought to be taken out, the questions arise as to the amount of the indemnity and the standing of the office granting it.

The first question is much more easily answered than the second. To fix the limit at £5,000 may be sufficient at the present moment, but, once juries realize that the damages will be paid by insurance companies, there is as danger that the already high scale of damages awarded will be subscantially -increased, and the effect of this will mean that insurance will cost more. The policyholders of an insurance company pay the claims, after all. For obvious reasons the second question is very difficult to answer. How is .anyone toknow that the weak insurance company of to-day will not be one of the strongest of to-morrow? I know of more than one company which to-day possesses as many millions of pounds of real assets as it possessed

To return to the question of cost, the cheapest form of protection is, of course, a policy covering third-party risks only. These policies cost, on the average, only one-half the amount charged for a " comprehensive " policy, and provided the owner will bear an agreed first part—usually £5—of every loss sustained, insurance in the case of a Ford or other ton lorry can be obtained for as little as £4 10s. per year.

Even this low premium, however, does not exhaust the possibilities of cheap insurance. Every issue of Tire Commercial Motor contains advertisements of insurance policies which the advertisers state they are prepared to issue with the premiums payable by instalments.

Moreover, the prospective insurer, even in the case of a policy calling for payment of the premium annually, has generally three or four, weeks' grace allowed to him by his agent or broker before being asked to pay the premium, and it is almost unbelievable, therefore, that there can be any considerable number of motor owners or 'users to whom the cost of an insurance policy such as I have described is prohibitive.

• If there are any such in Ireland or England or elsewhere. I think the transport industry is not likely to benefit by their remaining in its ranks. DIOGENES.