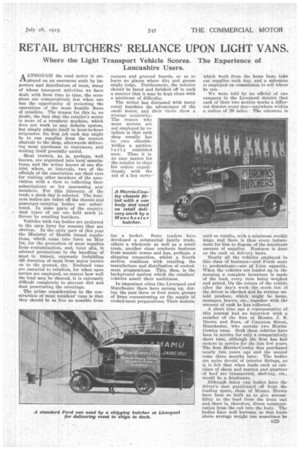 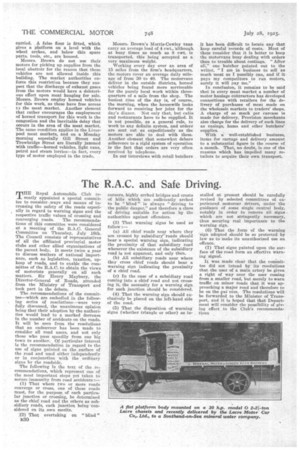 Page 13, 28th July 1925 — RETAIL BUTCHERS' RELIANCE UPON LIGHT VANS.
Close
Noticed an error?
If you've noticed an error in this article please click here to report it so we can fix it.

Where the Light Transport Vehicle Scores. The Experience of Lancashire Users.

ALTHOTJGH the road motor is employed on an enormous scale by importers and distributors of meat, many of whose transport activities we have dealt with from time to time, the occasions are comparatively few when one has the opportunity of reviewing the operations of the more humble fleets of retailers. The reason for this is, no doubt, the fact that the retailer's motor is more of a runabout machine, which does not work to any definite system, but simply adapts itself to hour-to-hour exigencies. Its first job each day might be to rim supplies from the nearest abattoir to the shop, afterwards delivering meat purchases to customers, and making itself generally ,useful.

Meat traders, as is, perhaps, well known, are organised into local associations, and the writer knows of one district where, at intervals, two of the officials of the association use their cars for visiting other members of the association with a view to collecting their subscriptions or for canvassing new members. For this itinerary of the trade a sleek day is selected. The business bodies are taken off the chassis and passenger-carrying bodies are substituted. In some parts of the country dual types of car are held much in favour by retailing butchers.

Vehicles with van bodies are preferred to the open lorry for reasons that are obvious. In the early part of this year the Ministry of Health issued regulations, which came into force on May 1st, for the protection of meat supplies from .contamination, and, inter aim, it advised precautions in the handling of meat in transit, expressly forbidding tlA dumping of meat from raptor lorries on to the ground, etc. Enclosed vans are essential to retailers, for when open lorries are employed, no matter how well the load may be sheeted, it is extremely difficult completely to prevent dirt and dust penetrating the coverings.

The prime consideration in the construction of meat retailers' vans is that they should be as free as possible from corners and grooved boards, so as to leave no places where dirt and grease might lodge.. Furthermore, the interior should be faced and finished off in such a manner that it may be kept clean with a minimum of difficulty.

The writer has discussed with many retail butchers the advantages of the small motor, and their views show a strange unanimity. The reason why more motors are not employed by retailers is that each shop usually has its own clientele within a particularly restricted area. Thus it is an easy matter for the retailer to clear his orders expeditiously with the aid of a boy carry-fl ing a basket. Some traders have developed a substantial family trade, others a wholesale as well as a retail trade, another class conducts business from seaside towns and has, perhaps, a shipping connection, whilst a fourth section combines with retailing the manufacture and distribution of cookedmeat preparations. This, then, is the background against which the retailers' vehicles assert their usefulness.

In important cities like Liverpool and Manchester there have sprung up, during the past three or four years, groups of firms concentrating on the supply of cooked-meat preparations. Their motors, which work from the home base, take out supplies each day, and a salesman is employed on commission to sell where he can.

We were told by an official of one company in the Liverpool district that each of their two motors works a different district every day—anywhere within a radius of 20 miles. The salesman is paid on results, with a minimum weekly wage, and there is thus every inducement for him to dispose of the maximum amount of supplies. Business is done on the cash on delivery basis.

Nearly all the vehicles employed in this class of business—and Fords seem to predominate—are of 1-ton capacitY. When the vehicles are loaded up in the morning a complete inventory is made of the load, every item being weighed and priced. On the return of the vehicle after the day's work the stock list of the driver is checked and he returns unSold produce, which might be hams, sausages, brawn, etc., together with the amount of cash he has collected.

A short time ago a representative of this journal had an interview with a member of the firm of Messrs. J. S. Brown and Sons, of Cateaton Street, Manchester, who operate two MorrisCowley. vans. Both these vehicles have been in service for only a comparatively short time, although the .firm has had motors in service for the last few years. The first .Morris-Cowley was purchased nearly two years ago and the second some three months later. The bodies are quite devoid of interior fittings, as it is felt that when loads such as carcases of sheep and mutton and quarters of beef are transported, shelving, etc., would be• a hindranee.

Although many van bodies have the driver's seat partitioned off from the loading space, those of Messrs. Brown have been so built as to give accessibility to the load from the front end and, there is, therefore, direct communication from the cab into the body. The bodies have well bottoms, so that loads above average weight can sometimes be carried. A false floor is fitted, which gives a platform on a level with the wheel arches, and below this spare parts, tools. etc., are housed.

Messrs. Brown do not use their motors for picking up supplies from the local abattoir for the reason that these vehicles are not allowed inside this buildingThe market authorities enforce this restriction because they suspect that the discharge of exhaust gases from the motors would have a deleterious effect upon meat hanging for sale. Messrs. Brown employ horsed vehicles for this work, as these have free access ta the meat market. Another element that rather encourages the employment of horsed transport for this work is the congestion and the inevitable delay that occurs in the area of the meat market. The same condition applies in the Liverpool meat markets, and on a Monday morning especially Gill Street and Trowbridge Street are literally jammed with traffic—horsed vehicles, light vans, petrol and steam lorries—in fact, every type of motor employed in the trade. Messrs. Brown's Morris-Cowley vans carry an average load of 4 cwt., although. at busy times as much as 8 cwt. is transported, this being accepted as a very maximum weight.

Working every day over an area of 15 miles from the firm's headquarters, the motors cover an average daily mileage of from 30 to 40_ The motorvans deliver in the outside districts, horsed vehicles being found more serviceable for the purely local work within threequarters of a mile from the shop. The busiest time of the day is, of course, the morning, when the housewife looks forward to receiving her joint for the day's dinner. Not only that, but cafés and restaurants have to be supplied. It is not possible, as a general rule, to work to any definite system, and orders' are sent out as expeditiously as the motors are able to deal with them. Another element that somewhat debars adherence to a rigid system of operation is the fact that orders are very often received by telephone.

In our interviews with retail butchers

it has been difficult to locate any that keep careful records of costs. Most of them consider that it is better to keep the motorvans busy dealing with orders than to trouble about costings. "After all," one butcher pointed out to the writer, "I am in business to sell as much meat as I possibly can, and if it pays my competitors to run motors, surely it will pay me."

In conclusion, it remains to be said that in every meat market a number of motor haulage contractors has developed connections with retailers for the delivery of purchases of meat made on the wholesale markets to traders' shops. A charge of so much per carcase is made for delivery. Provision merchants also charge for the delivery of such lines as casings, hams and other butchers' supplies. , With a well-established business, items for cartage and delivery amount to a substantial figure in the course of a month. That, no doubt, is one of the reasons which has impelled many retailers to acquire their own transport.