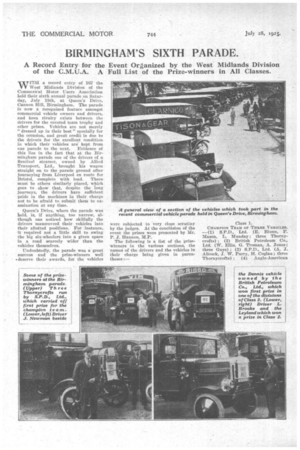 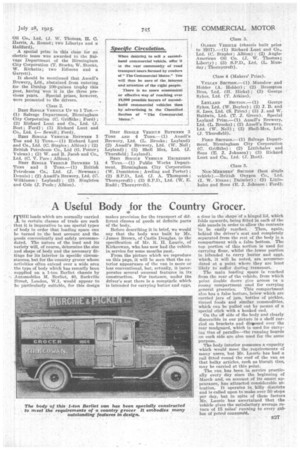 A Record Entry for the Event Organized by the West Midlands Division of the C.M.U.A. A Full List of the Prize-winners in All Classes.

NVITH a record entry of 167-the Wrst Midlands Division of the Comment:1d Motor Users Association held their sixth annual parade on Saturday, July 18th, at Queen's Drive. Cannon Hill, Birmingham. The parade is now a recognized feature amongst commercial vehicle owners and drivers, and keen rivalry exists between the drivers for the coveted team trophy and other prizes. Vehicles are not merely " dressed up in their best specially for the occasion, and gretit credit is due to the drivers for the excellent condition in which their vehieles are kept from one parade to the next. Evidence of this lies in the fact that at the Birmingham parade one of the drivers of a Sentinel steamer, owned by Allied Transport, Ltd., -brought his wagon straight on. to the parade ground after journeying from Liverpool en route for Bristol, complete with load. . There must be others similarly placed, which goes to show that, despite the long journeys, the drivers have sufficient pride in the machines in their charge not to be afraid to submit them to examination at any time.

Queen's Drive, where the parade was held, is, if anything, too narrow, although one noticed how skilfully the drivers manoeuvred their vehicles into their allotted positions. For instance, it required not a little skill to swing the big six-wheelers into a giV011 space in a road scarcely wider than the vehicles themselves.

T_Turloubthdly, the parade was a great succeas and the prize-winners well • deserve their awards, for the vehicles

were subjected to very close scrutiny by the judges. At the conclusion of the event the prizes were presented by Mr. P. J. Hannon, M.P.

The following is a list of the prizewinners in the various sections, the names of the drivers and the vehicles in their charge being given in parentheses Class 1.

A special prize in this class for an electric team was awarded to the Salvage Department of the Birmingham City Corporation (T. Stocks; W. Stocks, W. Ricketts; two Edisons and a Garrett).

It should be mentioned that Ansell's Brewery, Ltd., abstained from entering for the Dunlop 100-guinea trophy this year, having won it in the three pre vious years. Special prizes, however, were presented to the drivers.

BEST SINGLE VEHICLE UP TO 1 Tow.—