Steerable bogies for the UK 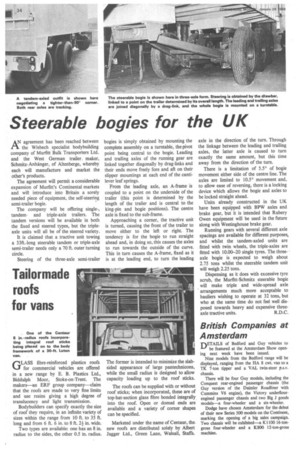 Page 36, 28th January 1966 — Steerable bogies for the UK
Close
Noticed an error?
If you've noticed an error in this article please click here to report it so we can fix it.

AT agreement has been reached between the Wisbech specialist bodybuilding company of Murfitt Bulk Transporters Ltd. and the West German trailer. maker, SchmitzAnhanger, of Altenberge, whereby each will manufacture and market the other's products.

The agreement will permit a considerable expansion of Murfitt's Continental markets and will introduce into Britain a sorely needed piece of equipment, the self-steering semi-trailer bogie.

The company will be offering single-, tandemand triple-axle trailers. The tandem versions will be available in both the fixed and steered types, but the tripleaxle units will all be of the steered variety.

It is claimed that a tractive unit towing a 33ft--long steerable tandem or triple-axle semi-trailer needs only a 70 ft. outer turning circle.

Steering of the three-axle semi-trailer bogies is simply obtained by mounting the complete assembly on a turntable, the pivot point being central to the bogie. Leading and trailing axles of the running gear are linked together diagonally by drag-links and their ends move freely fore and aft on their slipper mountings at each end of the cantilever leaf springs.

From the leading axle, an A-frame is coupled to a point on the underside of the trailer (this point is determined by the length of the trailer and is central to the king-pin and bogie positions). The centre axle is fixed to the sub-frame.

Approaching a corner, the tractive unit is turned, causing the front of the trailer to move either to the left or right. The tendency is for the bogie to run straight ahead and, in doing so, this causes the axles to run towards the outside of the curve. This in turn causes the A-frame, fixed as it is at the leading end, to turn the leading axle in the direction of the turn. Through the linkage between the leading and trailing axles, the latter axle is caused to turn exactly the same amount, but this time away from the direction of the turn.

There is a limitation of 5.50 of bogie movement either side of the centre line. The axles are limited to 10.5° movement and, to allow ease of reversing, there is a locking device which allows the bogie and axles to be locked straight ahead.

Units already constructed in the UK have been equipped with BPW axles and brake gear, but it is intended that Rubery Owen equipment will be used in the future along with Westinghouse brake gear.

Running gears with several different axle spacings are available for different purposes, and whilst the tandem-aided units are fitted with twin wheels, the triple-axles are fitted with 10.00-20 single tyres. The three• axle bogie is expected to weigh about 2.75 tons whilst the steerable tandem unit will weigh 2.25 tons.

Dispensing as it does with excessive tyre scrub, the Murfitt-Schmitz steerable bogie will make triple and wide-spread axle arrangements much more acceptable to hauliers wishing to operate at 32 tons, but who at the same time do not feel well disposed towards heavy and expensive three axle tractive units. R.D.C.