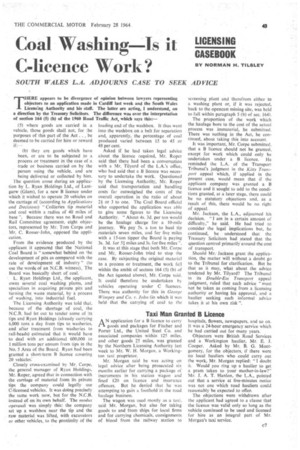 Page 45, 28th February 1964 — Taxi Man Gra nted B Licence
Close
Noticed an error?
If you've noticed an error in this article please click here to report it so we can fix it.
Keywords : Haulage, Workington, Conscientious Objector, Violence, Sociology, Peace

A N application for a B licence to carry ri goods and packages for Fischer and Porter Ltd., the United Steel Co. and associated companies within 125 miles, and other goods 25 miles, was granted by the Northern Licensing Authority last week to Mr. W. H. Morgan, a Workington taxi proprietor.

Mr. Morgan said he was acting on legal advice after being prosecuted six months earlier for carrying a package of instruments in his station wagon and fined £20 on licence and insurance offences. But he denied that he was attempting to gain a foothold in the road haulage business.

The wagon was used mostly as a taxi, said Mr. Morgan, but also for taking goods to and from ships for local firms and for carrying chemicals, consignments of blood from the railway station to hospitals, flowers, newspapers, arid so on. It was a 24-hour emergency service which he had carried out for many years.

Objectors were British Road Services and a Workington haulier, Mr. E J. Cooper. Asked by Mr. B. G. Montgomery, for the objectors, if there were no local hauliers who could carry out the work, Mr. Morgan replied: "I doubt it. Would you ring up a haulier to get a pram taken to your mother-in-law?" Mr. I. A. T. Hanlon, the L.A., pointed out that a service at five-minutes notice was not one which Toad hauliers could reasonably be expected to offer'.

The objections were withdrawn after the applicant had agreed to a clause that the licence was valid only so long as the vehicle continued to be used and licensed for hire as an integral part of Mr. Morgan's taxi service.