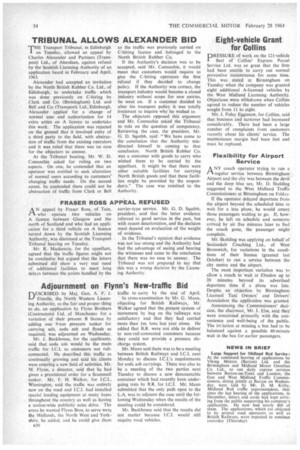 THE Transport Tribunal, in Edinburgh on Tuesday, allowed an appeal by Charles Alexander and Partners (Transport) Ltd., of Aberdeen, against refusal by the Scottish Licensing Authority of an application heard in February and April,

Alexander had accepted an invitation by the North British Rubber Co. Ltd., of Edinburgh, to undertake traffic which was done previously on C-hiring by Clark and Co. (Birmingham) Ltd. and Bell and Co. (Transport) Ltd., Edinburgh. Alexander applied for a change of normal user and authorization for 14 extra artics an A licence to undertake this work. The application was rejected on the ground that it involved entry of a third party to the field, with abstraction of traffic from the existing operators and it was ruled that there was no case for the objectors to answer.

At the Tribunal hearing, Mr. W. D. Connochie asked for ruling on two aspects. On one, he contended that an operator was entitled to seek alteration of normal users according to customers' changing traffic needs. On the second count, he contended there could not be abstraction of traffic from Clark or Bell as the traffic was previously carried on C-hiring licence and belonged to the North British Rubber Co.

If the Authority's decision was to be accepted, said Mr. Connochie, it would mean that customers would require to give the C-hiring operators the first refusal if they decided to change policy. If the Authority was correct, the transport industry would become a closed industry without scope for new entries, he went on. If a customer decided to alter his transport policy it was totally irrelevant to inquire why he wished to.

The objectors opposed this argument and Mr. Connochie asked the Tribunal to rule on the question of competency. Reviewing the case, the president, Mr. G. D. Squibb, said: "We have come to the conclusion that the Authority misdirected himself in coming to that conclusion. North British Rubber Co. was a customer with goods to carry who wished them to be carried by the appellant. It might be that there were other suitable facilities for carrying North British goods and that these facilities might be provided by the respondents." The case was remitted to the Authority.