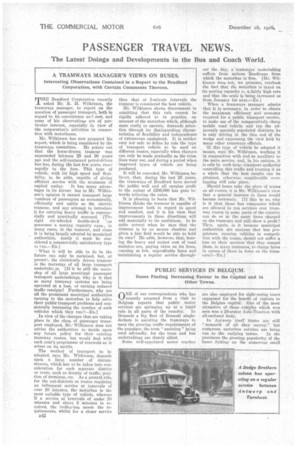 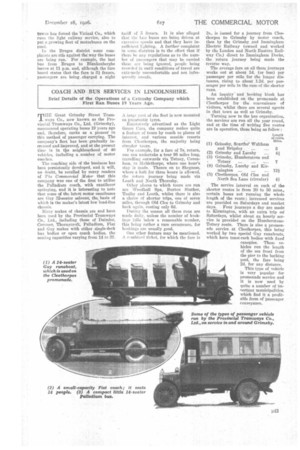 Page 60, 28th December 1926 — PUBLIC SERVICES IN BELGIUM.
Close
Noticed an error?
If you've noticed an error in this article please click here to report it so we can fix it.

Buses Finding Increasing Favour in the Capital and in Other Towns.

ONE of our correspondents who has recently returned from a visit to Belgium reports that public motor services are springing up at a rapid rate in all parts of the country. In Brussels a big fleet of Renault singledeckers is assisting the tramways to meet the growing traffic 'requirements of the populace, the term " assisting " being used advisedly, for the tram and bus undertakings are closely allied.

are also employed for sight-seeing tours organized for the benefit of visitors to the Belgian capital. One of the most attractive of these vehicles which was seen was a 24-seater Ado-Traction with all-enclosed body.

In Antwerp itself trams are still "-monarch of all they survey," but numerous motorbus services are being run to the outlying towns. In the provinces the growing popularity of the buses linking up the numerous small

towns has forced the Vieinal Co., which runs the light railway service, also to put a growing fleet of motorbuses on the road.

In the Bruges district some complaints are rife against the way the buses are being run. For example, the last bus from Bruges to 131ankenberghe leaves at 11 p.m. and, although the fare hoard states that the fare is ,3t francs, passengers are being . charged a night tariff of 5 francs. It is also alleged that the late buses are being driven at exeveeive speeds and that they have insufficient lighting. A further complaint in some districts is to the effect that if there be any regulations as to the number of pa.engers that may be carried these are being ignored, people being crowded in until conditions of travel are extremely uncomfortable and not infrequently unsafe.