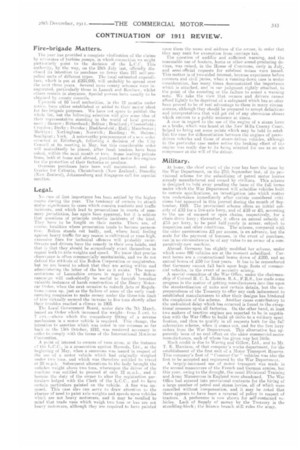 Page 3, 28th December 1911 — CONTINUATION OF 1911 REVIEW.
Close
Noticed an error?
If you've noticed an error in this article please click here to report it so we can fix it.
Keywords : Steam Wagon, Group Action, G, Traction Engine, Lorry

The year has provided a complete vindication of the claims by :lit,ocaties of turbine pumps, in which connection we might particularly point to the decision of the L.C.C. This authority, by the way, on the 25th July last, officially disclosed its intention to purchase no fewer than 211 self-propelled units of different types. The total estimated expenditure, which is put at L203,020, will probably be spread over the nest, three years. Several more county schemes were inaugurated, particularly those in Lanark and Renfrew. whilst, ethers remain in abeyance. Special powers have usually to be obtained by county councils. pwards of 60 local authorities, in the 12 months under not Re. have either established or added to their motor plant tor fire-brigade purposes. We have not space to publish the while list, but the following selection will give some idea of their representative standin,, in the world of local governmeet Barrow ; Birkenhead; Belfast ; Bradford ; Chesterfield ; Croy di ra ; Derby ; Dundee ; Hudderefield ; Hull; Manchester ; Mert hy ; Nottingham; Norwich ; Reading: St. Helene; Southport ; York. A noteworthy postponement of a may order occurred at Edinburgh, following a decision of the City Connell at its meeting in May, but this considerable order will undoubtedly be placed, after fresh tenders have been asked, within the next month or two. Some leading private firms, both at home and abroad, purchased motor fire engines for the protection of their factories or produce. Overseas purchases have been well maintained, and deliveries for Calcutta, Christchurch New Zealand', Dunedin t New Zealand) Johannesburg and Singapore call for especial mention.

ease of first importance has been settled by the higher courts during the year. The tendency of owners to attach undue significance to eases which concern roadside and traffic incidente. and which lead to prosecutions in courts of summary jurisdiction, has again been apparent, but it is seldom that questions of principle underlie incidents of the kind. They have to be fought on their merits. There are, of course, localities where prosecution tends to become persecution. Bolton stands out badly, and, where local feeling against heavy traffic for any reason is cultivated or runs high, excessive fines for technical offences will probably recur. Owners and drivers have the remedy in their own hands, and that is that they should be scrupulously exact themselves in reourd both to axle-weights and speed. We know that precise observance is often commercially unattainable, and we do not defend the attitude of the Bolton Corporation or magistrates, but we are bound to admit that they are acting within and administerieg, the letter of the law as it exists.The representations of Lancashire owners in regard to the Bolton campaign will undoubtedly be useful to furnish hereafter valuable instances of harsh construction of the Heavy Motorcar Order, when the next occasion to redraft Acts or Regulations comes up, just as the failure of some of the early roadcarrying companies to make mone7.' under the three-ton limit of tare virtually secured the increase to five tons shortly after their troubles reached a climax in 1903. The Local Government. Board, under date the 7th March, issued an Order which increased the weight-front 5 cwt. to 7 cwt.—above which the compulsory fitting of a reverse mechanism in a motor vehicle is required. This change, the intention to sanction which was noted in our columns so far back as the 13th October, 1910, was rendered necessary in order to comply with the terms of the international Motorcar Convention. A point. of interest to owners of vans arose, at the instance rf the L.C.C., in a prosecution against Harrods. Ltd., at the beginning of May, when a summons was issued in respect of the use of a motor vehicle which had originally weighed under two tons, and which was therefore entitled to travel at 20 m.p.h. Subsequent. alterations to the body brought the unladen weight above two tons, whereupon the driver of the machine was entitled to proceed at only 12 m.p.h., and it became the duty of the owner to alter the registration particulars lodged with the, Clerk of the L.C.C., and to have certain particulars painted on the vehicle. A fine was imposed. This ca-se also can serve to draw attention to the absence of need to paint axle-weights and speeds !Ton vehicles which are not heavy motorcars, and it may be recalled to mind that trade vans which weigh two tons or less are not heavy motorcars, although they are required to have painted upon them the name and address of the owner, in order that they inay rank for exemption from carriage tax. The question of audible and sufficient warning, and the reasonable use of hooters, horns or other sound-producing devices, was raised, in the House of Commons, early in July, and semi-official requests for subdued noises were issued. This matter is of two-sided interest, because experience before coroners and civil juries, when a running-down case is under consideration, has many times demonstrated the importance which is attached, and in our judgment rightly attached, to the point of the sounding or the failure to sound a warning note. We take the view that owners and drivers cannot afford lightly to be deprived of a safeguard which has so ofter been proved to be of real advantage to them in many circum stances, although they should be prepared to accept definitions and interpretations that will get rid of any obnoxious abuses which amount to a. public nuisance at times.

A case in regard to the use of the engine of a steam lorry as LL brake, which was heard at the New Mills County Court,, helped to bring out some points which may be held to estab lish the case for differentiation between the engines of petro. driven vehicles and those of steam-driven vehicles, althougn in the icrticular case under not-ice the braking effect of ties engine ,Yis really due to its being adapted for use as an air 0m-we...sew at the will of the driver.

At home, the chief event of the year has been the issue by the War Department, on the 27th September last, of its provisional scheme for the subsidising of petrol motor lorries already manufactured and owned by eivflians. This scheme is designed to hold sway pending the issue of the full terms under which the War Department will subsidise vehicles built to certain specifications, an investigation into which matter was undertaken immediately after certain considered criticisms had appeared in this journal during the month of September, 1910. The provisional scheme offers an initial subsidy of 4112 for a live-axle lorry, and of £10 or £8, according to the use of encased or open chains, respectively, for a chain-drive lorry; thereafter, it offers an annual subsidy of £15 per lorry, to be paid half-yearly in arrear, subject to inspection and other conditions. The scheme, compared with

the older parsimonious per annum, is an advance, but the scale for the payment of bonuses, in the event of purchase, can in no circumstances be of any value to an owner of a comparatively-new maelline.

Abroad, °enmity has slightly modified her scheme, under which some 800 vehicles are atthe moment subsidized. Current terms are a constructional bonus down of £200. and an annual bonus of £50 for four years. It has to be remembered that Germany cannot fall back upon huge fleets of commercial vehicles, in the event of necessity arising. A special committee of the War Office, under the chairmanship of Colonel 11. C. L. Holden. B.A., F.R.S., has made some progress in the matter of getting manufacturers into line upon the standardisation of units and certain details, but the unpreparedness of the Treasury to offer any cash inducement t.o established manufacturers to alter their designs has hindered the completion of the scheme. Another cause contributory to the undoubted delay which has occurred is found in the exceptional pressure upon all factories. On the other band, at least two makers of traction engines are reported to be in negotiation with the War Office to build ub initin to a military specification, and thus to qualify in all respects both for the ful7 subvention scheme, when it comes out, and for the first lorry orders from the War Department, This alternative has apparently been ef no real effect on the older commercial-motor manufacturers, each of whom has given way but little. Much credit is due to Waring and Gillow, Ltd., and to Mr. T. E. Harrison, of that company's works department, for the establishment of the first unit of a Motor Transport Reserve. This company's fleet of" Commer-Car " vehicles was also the first to be accepted and registered by the War Department. A largely-increased use of motor transport was made in the annual manoeuvres of the French and German armies, but this year, owing to the drought, the usual Divisional Training and Army Manoeuvres in England were abandoned. The War Office had entered into provisional contracts for the hiring of a large number of petrol and steam lorries, all of which were cancelled without compensation, and it may be noted that there appears to have been a reversal of policy in respect (ef tractors. A preference is now shown for self-contained vehicles. Lack of Supply of money by the Treasury is the stumbling,-block ; the finance branch still rules the army.